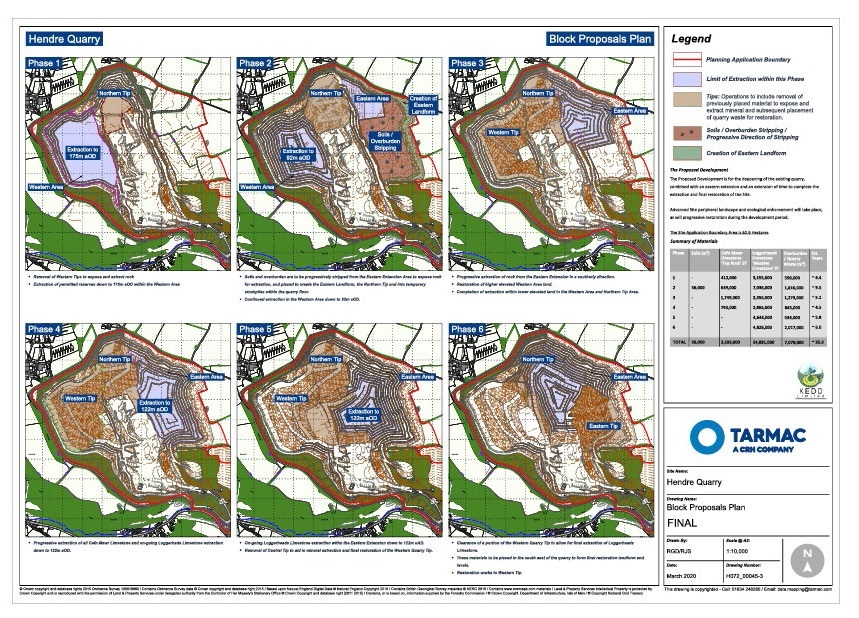 A bid to extend the life of a limestone quarry in Flintshire by 35 years could go ahead despite concerns over blasting causing cracks in neighbours’ homes.

Building materials giant Tarmac wants to extract more than 31 million tonnes of limestone from Hendre Quarry, near the village of Rhydymwyn.

The 55.9 hectare quarry has been in operation since the early 20th century, supplying material for a number of major developments, including Chester Zoo, Liverpool FC’s Anfield Stadium and the Mersey Gateway Crossing.

The company now wants to make the quarry larger by creating a 6.7 hectare extension to the eastern section of the site, pushing the end date for work forward from 2030 until 2055 and protecting 17 full-time jobs.

However, fears have been raised by residents who have claimed the blasting method used to extract limestone is causing their houses to crack.

Road safety issues have also been highlighted due to the number of lorries travelling to and from the quarry via the A541.

Despite a total of 21 objections being submitted against the proposals, the application has been recommended for approval by Flintshire Council’s chief planning officer.

In a report to councillors, Andrew Farrow said: “Concerns have been raised in relation to the ‘heavy quarry blasting’ reported to cause disturbance to local residents.
“A number of letters of received against the extension raised concerns in relation to the damage and stress on their property, which they feel is as a result of blasting at the quarry.
“Should planning permission be granted, a limit of 6mm/s ppv (peak particle velocity/vibrations) would continue to be imposed.
“Tarmac continually seeks to minimise blast vibration and air overpressure through blast design, and there is no evidence to prove that continued ppv levels of 6mm/s can cause damage to properties.”

Cilcain Community Council is among the public bodies which have voiced concerns over traffic problems.

But the local authority’s highways departments has not raised any objections against the proposals.

Mr Farrow also said the existing junction connecting the site to the A541 was performing “adequately” with no improvements required.

He said: “The proposal involves a lateral extension to the east of the existing Hendre Quarry, working in six phases with progressive restoration for nature conservation purposes until 2055.
“The quarry has been in place for many years and the proposed extension is modest in area, and is relatively small in the context of the existing consented operation.
“The Regional Technical Statement 2 identifies shortfall crushed rock reserves in Flintshire to meet anticipated need in North Wales.
“This provides justification for the current proposals which will assist in meeting this need.”

The application will be considered by members of the council’s planning committee at a meeting being held tomorrow (Wednesday, July 21).

Approval has been recommended subject to the company entering a legal agreement to make payments towards maintaining a nearby nature reserve.