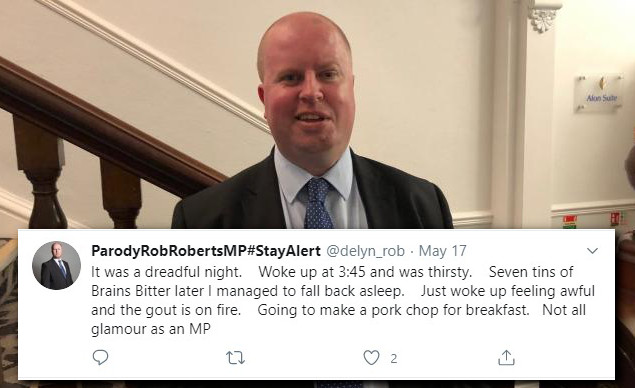 A Flintshire MP has hit out at the owner of a parody Twitter account which he says was set up to mock him.

Rob Roberts, the Conservative representative for Delyn, revealed last night that he had entered into an e-mail exchange with a person claiming to behind the @delyn_rob account.

The page was created in April and has posted dozens of tweets poking fun at the financial planner, who pulled off a shock result in December’s general election by unseating Labour’s David Hanson.

In a typical example of one of the spoof posts, earlier this week the account owner wrote: “Just woke up feeling awful and the gout is on fire. Going to make a pork chop for breakfast. Not all glamour as an MP.”

Mr Roberts, who lives in Mold, has now shared his comments to the apparent culprit behind it, whose actions he described as “disgraceful” and accused them of bullying him.

Addressing them directly on the social media network, he said: “I think what you and other “parody” accounts such as this perpetuate is disgusting. MPs are people, with real feelings and real life issues going on.

“Our job is monumentally challenging and bears a responsibility that is at times overwhelming. I have dealt with bullies my whole life, but I find it the height of bad taste and pure meanness to be doing this kind of thing, especially at a time when so many elements of society are coming together in solidarity.

“I am hurt, disappointed and mostly ashamed that someone feels the need to create an account on social media with the express intent of pulling someone apart and mocking them for entertainment. It’s disgraceful.”

He added: “I can’t do anything to stop you and fully expect this email to be used as something else to mock.

“But I will say, think hard what kind of person you want to be. Because the kind that mocks others for sport simply isn’t a very good one.”

Earlier this week, Mr Roberts explained how he had previously suffered with mental health issues.

He shared his story to mark Mental Health Awareness Week, the theme of which is kindness this year.

In their response, they criticised Mr Roberts’ own behaviour on social media after he reportedly blocked a number of constituents.

He also recently entered a spat with Good Morning Britain host Piers Morgan over the UK Government’s response to the coronavirus crisis.

The person behind the account said: “Thanks for unblocking me, I find any MP that blocks a constituent on Twitter pretty ridiculous for all but egregious abuse or language.

“When you succeed we all succeed and everyone should be given the opportunity to do the job. I think you have two areas to work on.

“You respond in an undignified manner to people who are critical or disagree with you and your “no insult unreturned” policy is not one that plays well for a politician.”

They added: “The other thing is, there is nothing wrong with saying “I misspoke” or “I changed my mind”. It is hard to permanently delete that.

“So if you stop doing that and posting about your breakfast of champions with Cadbury’s and Coke it doesn’t give me much to work with.  Best to all who have been touched in life with mental health issues.”