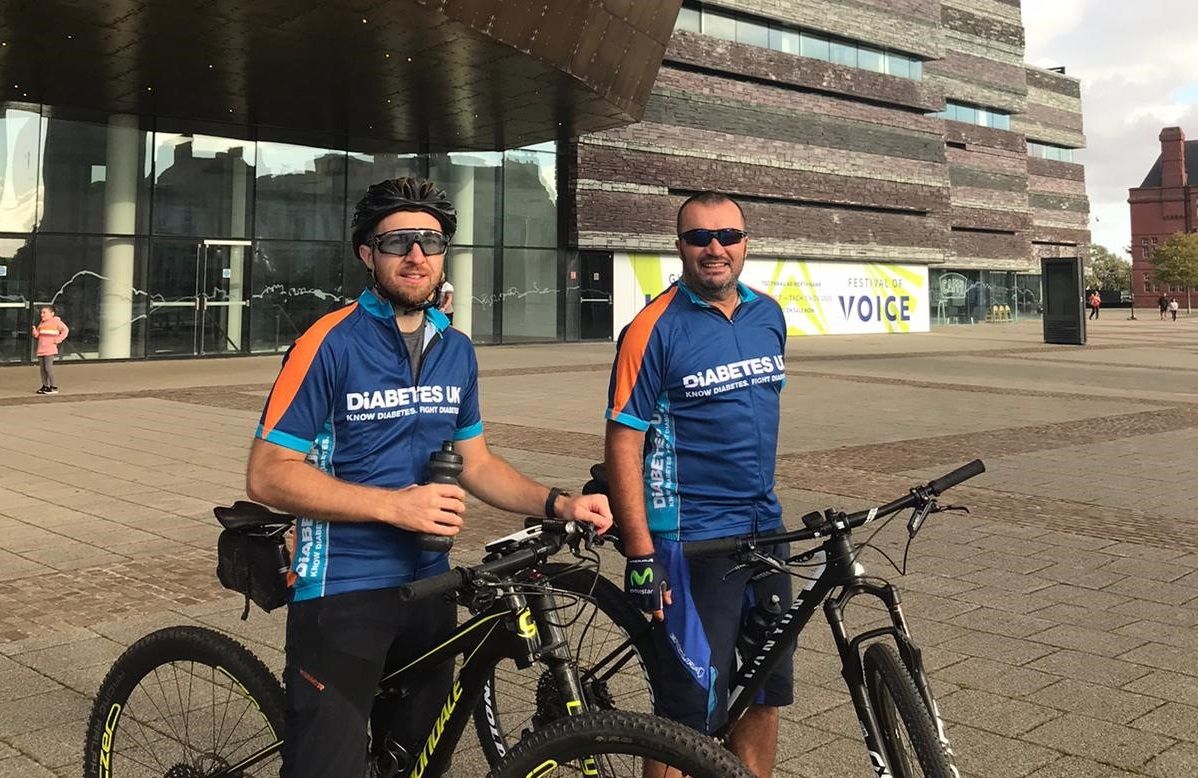 An uncle and nephew from Merthyr Tydfil have raised almost £7000 by taking on a gruelling, 250-mile bike ride from Holyhead to Cardiff Bay in aid of Diabetes UK.

Robert Evans, 49, and his nephew Rhys Deen, 29, took on the two-day challenge after Robert’s 14-year-old daughter, Bonnie, experienced temporary blindness in late 2019 after being diagnosed with type 1 diabetes

Bonnie’s problems with her eyes started in August 2019, when the family returned from holiday. Bonnie had also been very thirsty and losing weight. Robert explained: “At first we thought it was something she had caught swimming on holiday that was clouding her eyes.”

But things moved very quickly and Bonnie “went from having blurred vision, to an optician’s appointment and a GP visit and straight to A & E, all in the same day.” Tests revealed Bonnie had type 1 diabetes.

Robert said: “It was a shock to all of us, particularly me, my wife Rhianne and her younger sister Bella. The situation was made worse by her rare reaction that resulted in her losing sight in both eyes. She couldn’t be operated on until her blood sugars stabilised.”

Bonnie stayed in hospital for five days and seemed to be getting better, but her sight was deteriorating. Robert said: “We had to read her bloods and do her injections, as she couldn’t see anything. “It was such a scary time.”

Bonnie required two bouts of surgery in December 2019 and February 2020 to address the problems she was experiencing with her sight, but now her eyesight has thankfully been completely restored.

It was the family’s experience that drove Robert and Rhys to take on their coast-to-coast challenge. Robert explained: “We wanted to raise awareness and funds for Diabetes UK through a really tough challenge – on mountain bikes and on mostly off-road sections – so that we encouraged more donations.

“I usually cycled about three times a week, but trained by cycling longer distances almost daily for six months. We are very grateful for the help and support we have received from both Prince Charles and Royal Glamorgan hospitals plus the ongoing support from Diabetes UK Cymru.”

Robert and Rhys’s efforts not only encouraged family, friends and colleagues to donate, but the uncle and nephew’s employers – Santander and Welsh Water – also contributed with match-funding.

Bonnie missed most of school last year, but her parents are just happy that she has her health back and can get back to normal life as a teenager.

“Now, she manages her diabetes well, uses her phone to control her bloods and carbs, she does it all brilliantly as she’s delighted to have her vision restored,” Robert said.

Dai Williams, National Director at Diabetes UK Cymru said: “We are so happy that Bonnie has recovered and so thankful that we have supporters like Robert. For us, it’s so important to keep on alerting people to the dangers of undiagnosed diabetes in children and adults.

“The four Ts are: thinner, toilet, thirsty and tired, that is the person is losing weight, is going to the toilet more often, drinking fluids without being able to quench their thirst and feeling extremely tired. If you or your child are feeling unwell with these symptoms don’t hesitate to seek help immediately.”