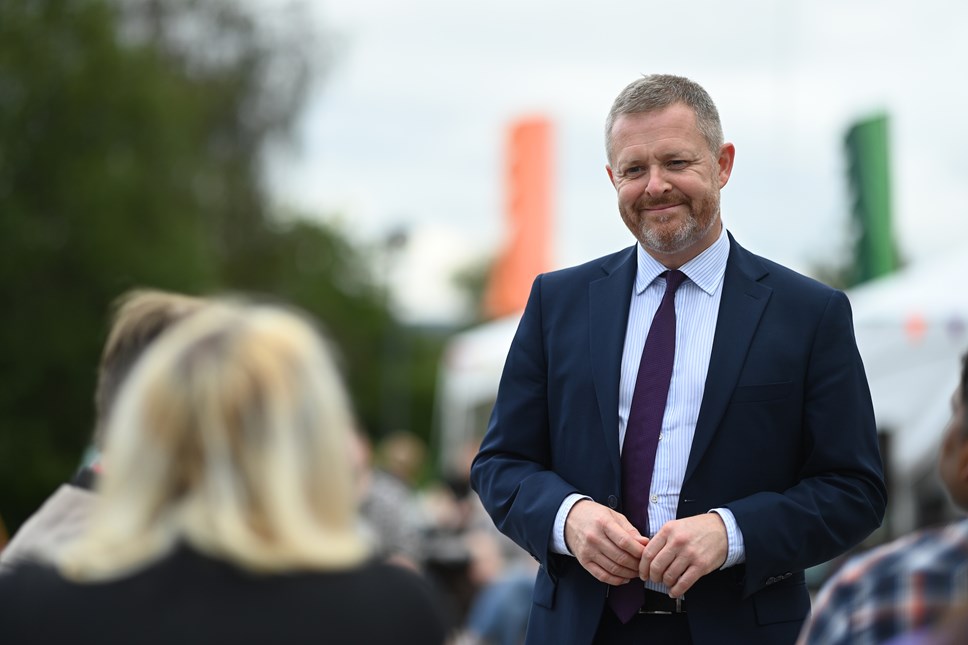 A Welsh Government minister has hit back at “misleading claims” being made by a campaign group over sex education policy.

Jeremy Miles, minister for education and the Welsh language, has issued a statement to provide “factually accurate” information to “clarify claims” he said were being made in the media to “disrupt the rollout of the new Curriculum for Wales.”

His statement was released on Friday, the day after an extraordinary council meeting in Caernarfon erupted into chaos during a debate over relationships and sexuality education (RSE).

An emergency meeting had been called for by five Gwynedd councillors after some parents had threatened to withdraw their children from schools amid a campaign by the Public Child Protection Wales group (PCPW).

PCPW has widely publicised its views against RSE in the media, including on programmes such as the Jeremy Vine Show.

The Welsh Government has defended its policy, saying that RSE due to be rolled out across schools in Wales in September was “lawful and proportionate”.

The RSE content has been approved by organisations such as the NSPCC, the Children’s Commissioner for Wales and Women’s Aid and other experts, it said.

The statement reads: “I would like to provide members with factually accurate information to clarify some of the claims reported in the media which seek to disrupt the rollout of the new Curriculum for Wales.

“A group of individuals have applied for an interim injunction to withdraw their own children from relationships and sexuality education (RSE) in September.

“This application is part of their claim for judicial review which will be heard later in the autumn.

“We are unable to comment on legal matters as they will be dealt with in proceedings in the High Court. We remain confident our reforms are proportionate and lawful.

“A number of these claimants are linked to a particular campaign group. I want to be very clear that the claims made by these individuals and by this group in its literature have absolutely no basis in truth whatsoever.

“None of the examples of teaching and resources cited by this group are from Wales and I want to be very clear that they would not be permitted under the RSE Code and statutory guidance.

“At the core of this literature is the group’s claims that RSE in Wales is part of a co-ordinated “global rollout” of “comprehensive sexuality education” which it is claimed will sexualise children. That is profoundly wrong and is a deeply dangerous claim.

“I strongly encourage members and anyone concerned to read the Code and statutory guidance for themselves to see how misleading and lacking in evidence the claims of this group are.

“As in the current Foundation Phase, our youngest learners will be taught about friendships and families, they will absolutely not be taught about romantic or sexual relationships and this is prohibited by the RSE Code. The law is crystal clear: teaching of RSE must be developmentally appropriate for each and every child.

“We have repeatedly asked the group to desist from spreading on numerous occasions deeply misleading information about RSE and what children will be taught. We will continue to do so. However, they persist in distributing leaflets containing these baseless claims about RSE in the new curriculum.

“I fully support the democratic process and the right to protest, and the importance of applying the law to ensure due process has been followed by governments in taking decisions.

“However, I am appalled at the aggressive tactics this group is using to put pressure on people working in our Local Authorities and our schools.

“RSE is about keeping children safe: from harmful relationships and situations, especially online.   Children now have to face pressures that we did not have to consider as we were growing up. We cannot ignore these dangers.

“The claims made by this group risk real damage to the education of our young people as they seek to deprive them of this vital learning which will protect them in the future.

“We are proud that our new curriculum and wider reforms are supported by respected organisations such as the NSPCC, the Children’s Commissioner and Welsh Women’s Aid. We have worked closely and openly with our partners over a number of years to develop this, including parents and carers, and teachers, and who have welcomed RSE as critical and timely.

“This statement is being issued during recess in order to keep members informed.  Should members wish me to make a further statement or to answer questions on this when the Senedd returns I would be happy to do so.”