“The lot of you, grow up. Grow some backbone!” – North Wales MS storms out of Senedd leaving other members “afraid” 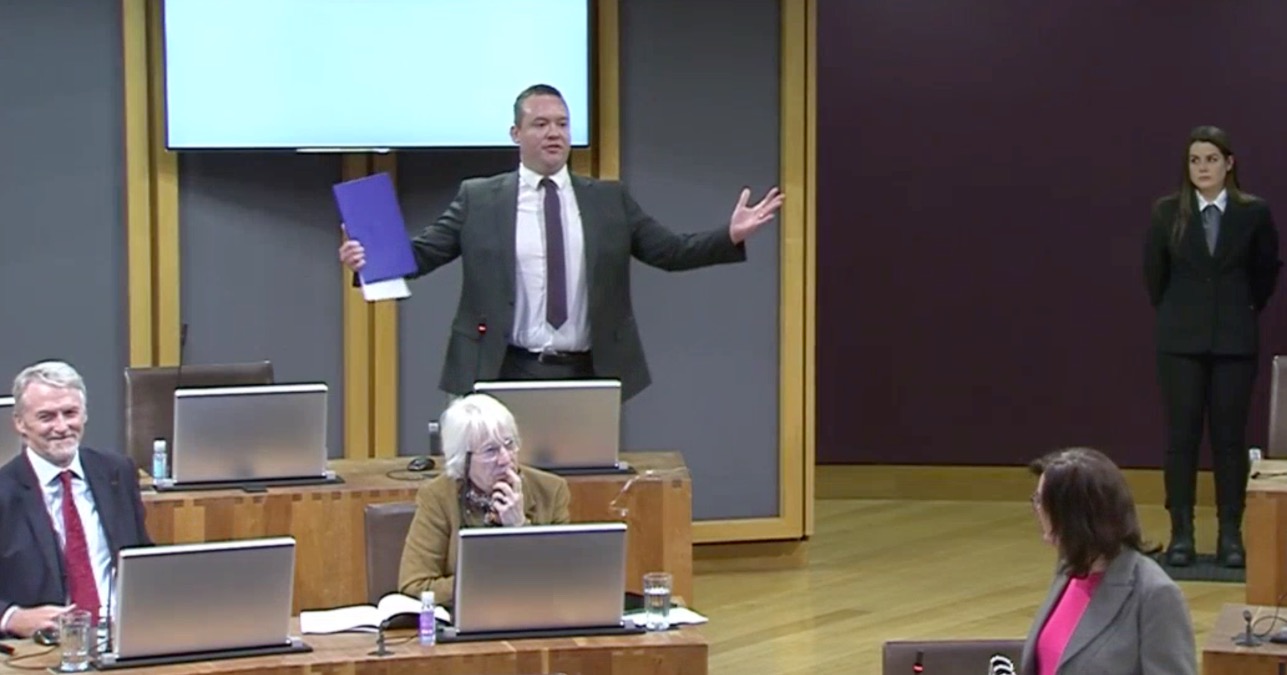 Vale of Clwyd MS Gareth Davies has been strongly criticised after slamming a file down and shouting loudly during a discussion on health services in his constituency.

The Conservative politician later stormed out of the chamber after the Llywydd (Presiding Officer) Elin Jones asked him to leave.

Some Senedd Members said they had been left “afraid” by his outburst, with North Wales Labour MS Carolyn Thomas seen moving from her seat to distance herself.

A North Wales MS has been strongly criticised after slamming a file down, shouting loudly and then storming out of a debate on health services in his constituency in more angry scenes in the Senedd https://t.co/AG6YRAtCjd pic.twitter.com/zO89DnhfdK

The row started with Mr Davies asking Health Minister Eluned Morgan about delayed plans for a new community hospital in Denbighshire at the time.

“For 10 years now, this Welsh Labour Government, in the shadow of Nye Bevan, is depriving local people on the Denbighshire coast of a facility that will cater for many people’s health problems, in a way that will take the emphasis off Ysbyty Glan Clwyd and reduce waiting times.

“Will the Minister disclose today whether, if this rudderless Welsh Government had acted a decade ago, people in Rhyl, Prestatyn and north Denbighshire would now have a local health facility that would have been affordable?”

The Health Minister replied: “Well, I wasn’t even in the Senedd 10 years ago, so I can’t tell you.

“You’ve got to take into consideration that a £22 million bill is very different from what the bill would be today, which is £80 million—which is a significant difference.

“And let’s remember that this is when capital budget is not increasing.That is a problem for us, and we can’t do much about that capital unless we get more money from the UK Government.

“I do take responsibility, but if I don’t have the capital budget, how on earth am I supposed to address those issues that you as Tories want me to address?”

That prompted distain from Mr Davies, who replied: “Come off it!”

Ms Morgan then said: “You speak to your bosses up in London, tell them to give me more capital and I’ll put my thinking cap on in terms of what we can do in terms of north Wales.”

The debate continued with Mr Davies responding: “Well, I don’t accept that answer really, Health Minister, as this has been devolved as your Government’s responsibility for nearly a quarter of a decade.

“And it’s interesting you say that, as, back in 2019, when you were hopelessly scraping around for votes, your predecessor, Vaughan Gething, and my predecessor, Labour’s Ann Jones, posted a social media video in this very Senedd saying that the Welsh Government would deliver on the north Denbighshire community hospital, and that Labour was working for the people of the Vale of Clwyd.

“Now, this video has been conveniently deleted and confined to the bowels of history, but I know what I’ve seen, Minister, and I have a good memory, unfortunately for you.

“Will you now admit that you’ve failed my constituents in Denbighshire, and that you’ve broken trust with them in believing that your party was working for local residents?”

The Health Minister rejected the point and said: “So, all of a sudden, I am responsible for the social media content of everybody within the Labour group. I’m sorry, guys, I’m not taking it. I’ve got enough responsibility on my hands as it is.

“Ann was not in government, and I think you’ve got to understand that. If that’s the case, I’m going to hold you responsible for what Liz Truss said. You want to do that? I’ll hold you to it.”

Mr Davies then said: “I had a meeting with the chair and directors of Betsi Cadwaladr University Health Board just yesterday, and they categorically told me that they’ve done all they can on their side of the bargain in terms of submitting their business case to you, planning procedures and anything else that’s pertinent to their remit. They are waiting for you, Minister.

“People in Rhyl, Prestatyn and north Denbighshire have been promised this for a decade, without a spade going in the ground or any tangible evidence that this Welsh Government is doing anything.

“People in my constituency have to travel as far as Colwyn Bay, Llandudno and even Bangor and Holywell at times to receive step-down treatment, and not all people have access to private vehicles, relying on an equally failing public transport system under this Labour Government.

“Will you meet with the health board at the earliest convenience and thrash these problems out to give local people the assurances that this government is on people’s side? And if you can’t guarantee that, will you now admit that you’ve failed the people of the Vale of Clwyd?”

The Minister responded: “I did question before I walked in here why I’m answering questions from a spokesperson who’s a spokesperson on care on issues that are related to health. I think that is something that perhaps the Presiding Officer might want to look at?”

The Presiding Officer declined and asked the Minister to reply to the question.

Mr Davies said: “The lot of you, grow up. Grow some backbone,” adding he had “had enough” before rising to his feet.

The Presiding Officer invited him to sit down and listen to the answer, but he did not appear keen.

He said: “If she’s got the decency to respond, then, come on, let’s have it. Let’s have it. Come on.” It was at this point that he dramatically slammed his file down.

He added: “Come on. I’m tired of this. Constant shifting of blame all the time.”

After much further back and forth, the Presiding Officer asked him to leave, saying: “I’m not asking the Minister to respond to the question, because things have gone out of order. You had your chance, Gareth Davies. I’ll ask you if you want to leave quietly now, if you want.”

The Presiding Officer commented: “It’s not. You’ve asked all your questions; it’s in no way an affront to democracy.”

On his way out, the Presiding Officer said: “I am asking you to leave at this point. You will apologise to the Chair before you are allowed to re-enter this Chamber, and I will expect that apology soon. ”

Alun Davies MS commented on the outburst in the chamber, stating: “Members are afraid to sit in this chamber”.

“Also, that same behaviour showed huge disrespect to you as the chair of this institution, and therefore the institution itself.”

“I’ve been here for over 15 years, and you’ve been here a lot longer, and I’ve never, ever experienced behaviour like that in this chamber.

“I just hope, and I’m sure everybody will join me, that it isn’t going to be repeated ever at all.

“It is a place of work, and, when people feel threatened by the behaviour of others in their place of work, especially when it’s an elected chamber and the office of parliament, I think it is very concerning.

“I thank you for allowing me to make the point of order. I hope the individual reflects seriously on his behaviour.

“I know that you asked for an apology. The apology, I think, is owed to all who witnessed it, but not least of all to the individual who felt so threatened and so upset by it.”

The Presiding Officer responded: “Thank you, Joyce Watson, for articulating some of the thoughts that have clearly gone through a lot of people’s minds and have been sent to me here on the front desk, following what was an unacceptable outburst by the member, and I think shook us all at the time, not only those in close proximity.

“I spent most of the morning telling a royal guest how well behaved we were as a chamber in comparison to elsewhere, and I was wrong in that, and I’m sure the member himself will want to reflect on his behaviour on this day, as well as any other day.

“As I said just following the event, I will expect an apology from Gareth Davies before he is called again in this chamber.

“That apology will be to me, yes, but it will be for all of us, and our expectations are high in this place, and one member failed to reach that expectation of behaviour this afternoon.

“As you’ve said, Joyce Watson, I’m sure he will be reflecting on that at this point, as well as all of us, and I will expect the apology to come, and I shall make sure that all members know when that is received.”