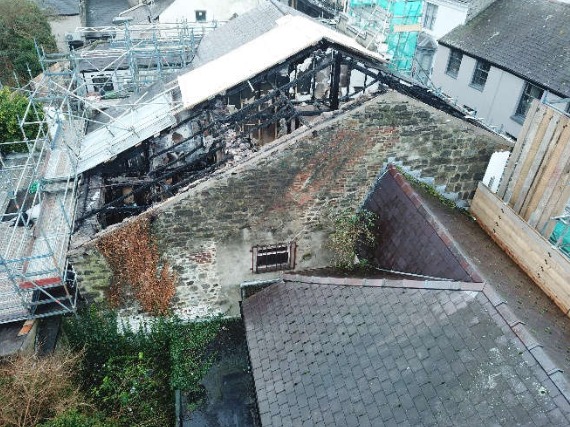 Formal plans to demolish two high street buildings that were ravaged by a “catastrophic” fire have been submitted to planning chiefs.
Sections of Bangor high street remain closed off to traffic since the blaze which took hold two months ago.
Firefighters were called to a fire in a flat above Japanese restaurant Noodle One on the High Street at approximately 3am on December 17.
The section between the city’s cathedral and the Varsity bar has been  closed off ever since with reports of extensive structural damage to both Noodle One and Morgan’s clothes shop next door.
But both “unsafe” buildings look set to be razed to the ground if the plan is given the go-ahead by Gwynedd council’s planning department, described as “in a significantly unsafe condition” and “in risk of imminent collapse,” with temporary scaffolding having been erected on the street to secure the buildings.
The supporting documents accompanying the demolition notice, state: “The proposals, as submitted because of the catastrophic fire to the buildings – 166 & 164 High St, which now must be demolished as these are unsafe structures which are currently contained by extensive temporary structural scaffolding to contain the risks of potential collapse.
“This is impacting the High St and has lead to closure of this part of the High Street to vehicle access and is of great concern to local business.”
Demolishing the buildings themselves, meanwhile, is said to require a mobile crane, further complicated due to the unstable condition of the buildings meaning that workers cannot access the ground floor.
In regards to working hours, the application goes on to note, “Consultation with Gwynedd council, Bangor City Council and North Wales Police has indicated that 07.00 to 24.00 hrs working under these circumstances would be acceptable due to the pressure to re-open the highway.
“This must be reviewed against safety considerations (lighting, shift patterns etc).
“It is envisaged that during the controlled demolition phase that 7 day working will be employed and should the response of the building during disturbance warrant it, then 24 hour work would need to be an option (gross instability and risk).”
It’s expected that Gwynedd council planning officers will make a decision in due course, with the authority retaining hoping that the road can re-open for Easter. ‌﻿​﻿‌﻿‌﻿​﻿​﻿​﻿‌﻿‍﻿‌﻿​﻿‌﻿​﻿‌﻿​﻿​﻿​ 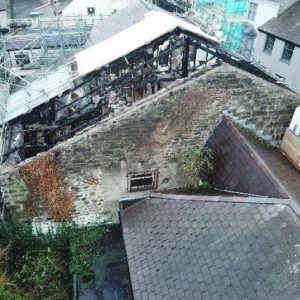