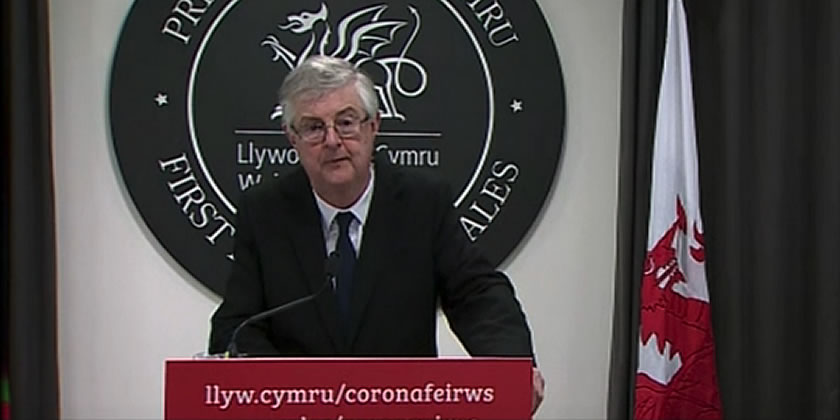 The First Minister has said that new admissions for coronavirus patients in Wales have started to decline as the situation stabilises.

Speaking at a Welsh Government press conference held this afternoon, Mark Drakeford said people could draw some “further confidence” from the drop in figures.

He also announced the scrapping of a previous target of achieving 5,000 tests for COVID-19 every day by the middle of this month, before declining to set a new goal.

He said: “Professor Kerry Phillips in a BBC interview yesterday from Swansea University said that he thought setting a number had become a distraction.

He said the original target hadn’t been achieved for reasons outside the government’s control.

The latest data shows 921 tests took place on the last day of reporting, despite Wales having capacity for around 1,300 tests per day.

During the press conference, the First Minister was also asked about a rapid review of testing – the outcome of which was announced yesterday.

Mr Drakeford said: “We’ve had a meeting this morning, involving the military, to turn the recommendations of the review into actions on the ground and we focused this morning on how we can streamline the path from the person who needs the test to getting that test done, because as you all know, at the end of last week, particularly, we had tests available that weren’t being taken up.

“That was partly because of the complexity of the system. We are using military planners to help us to streamline that system as best we can.

“You still have to have safeguards in the system, you’ve still got to make sure that people turn up at the right place, at the right time, have the right to test for the right person and that does take a bit of organising, but we are confident that we can do it in a more streamlined way.”

North.Wales asked the First Minister about the UK Government creating a ‘mega lab’ in Alderley Park in Cheshire – 50 miles away from Wrexham.

We questioned whether any any Welsh tests be sent there rather than Cardiff over the coming weeks, but Mr Drakeford did not provide a definitive answer.

He said: “My understanding is that the mega lab opened properly yesterday. So it’s very early days there.

“I generally want to make the point from the government’s point of view that the border between England and Wales is not a decisive matter in fighting coronavirus. Coronavirus is a global issue.

“We don’t ask ‘is the facility in England? or is it in Wales?’ We ask ‘is it the best facility for us to use?’.

“At the moment we’ve been testing people and the test results have been established here in Cardiff.”