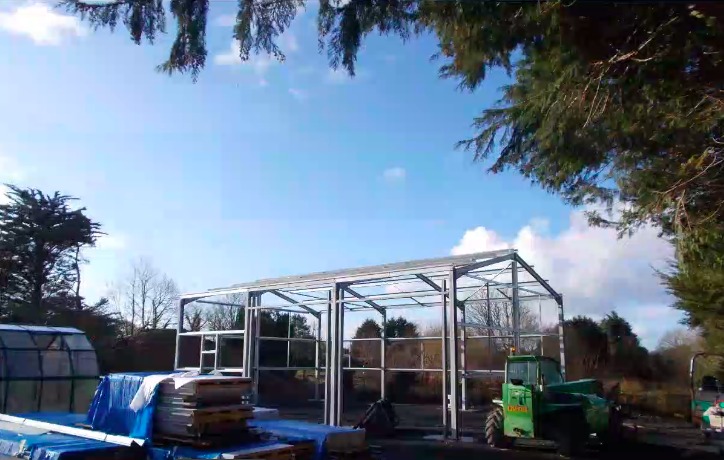 Planning inspectors have decided that an under construction vintage car garage can be completed, following a council’s earlier decision which could have forced the “monstrous” structure to be torn down.

In July the authority’s planning committee followed the advice of officers in refusing permission for the plans in Llanddaniel, citing its size and design as areas of concern.

Planned to be used to store classic cars, a prior site visit found that the steel frame of the garage had already been erected without planning permission, measuring 13.8m long x 9.2m wide and 5.7m in height and covering a greater area than the house next door.

Further work was said to have taken place before the planning committee meeting, including the walls and roof, and would be used to store vehicles and a campervan.

But after the applicant, Mr Colin Davies, appealed against the committee’s decision to refuse, the planning inspectorate has now confirmed that the development can indeed go ahead.

In her report, inspector Vicki Hurst said that while she concurred with the council that the scale, height and overall finishes of the building had an “industrial appearance” and “somewhat at odds with the domestic scale of the adjacent bungalow and the surrounding residential development,”  the fact that it was positioned on lower ground would minimise its impact.

She added, “Furthermore, vegetation along both the front and side boundaries of the appeal site result in it not being unduly prominent in the street scene and the Council acknowledges that the site is fairly concealed from a visibility point of view.

“Whilst the garage would inevitably be more visible during the Winter months, given its position and recessive colour I do not find it to be a particularly dominating structure in the surroundings.

“Furthermore, I note that the submitted plans propose landscaping to the south and east of the garage.

“Whilst I do not have the full details of such a scheme, appropriate landscaping will further assist in screening the building. Such landscaping can be secured by a condition.”

Conditions attached to the permission mean it can only serve personal and not business use and that landscaping works are carried out and maintained.

The application had been described by council planning officers as “resembling an industrial unit more than a conventional garage”, with a letter of objection having also been submitted.

But local member Cllr Eric Wyn Jones had urged councillors to back the applicant, noting his view that the plans conformed with the Local Development Plan.

The garage would be for private use and wouldn’t have any impact on anyone and can’t be seen from the road,” he argued.

“I don’t see it as being out of place at all and can be justified by policy and I wouldn’t have called this in to committee nor supported it otherwise.”

His fellow ward member, Cllr Dafydd Roberts, described the plans as a “monstrosity”, claiming with the size of the garage not justifying its intended use.

Speaking to the Local Democracy Reporting Service, the applicant’s agent, Mark Davies, said that both he and his client were “delighted” with the inspectorate’s conclusion.