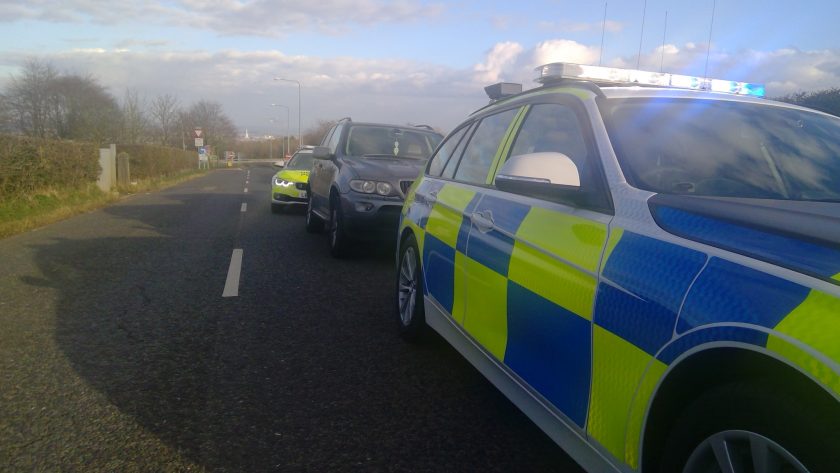 Over £1.8m worth of drugs have been seized and almost 170 arrests linked to County Lines have been made by a policing unit, set up just over a year ago to clamp down on organised crime and drug gangs in north Wales.

Since their launch back in February 2020, the Intercept Team have recovered a substantial amount of controlled drugs, tens of thousands of pounds in cash, mobile phones, and weapons – such as knives and a Taser.

Over 227 pro-active arrests totalling 428 individual offences have also been made.

The team, which was created thanks to funding from the Office of the Police and Crime Commissioner, use innovative technology to ensure they’re able to intercept and disrupt criminals, making north Wales a hostile environment for crime groups to operate within.

Working closely with the Roads Policing Unit, Firearms Alliance Team, local policing colleagues as well as other police forces including Merseyside Police, the interceptors are tasked to focus on individuals and locations daily, including OCG’s (Organised Crime Groups) and County Lines targets that are causing significant crime-related problems for local communities.

Two individuals who were stopped by the Interceptors on Rhuallt Hill last month whereby a large quantity of drugs were later recovered, have been jailed.

Inspector Matt Geddes, who is in charge of the team, said: “We set out to disrupt criminals and protect communities across north Wales from the harm serious and organised criminality causes.”

“Those involved in serious and organised crime use the roads and other transport networks extensively in order to facilitate their criminal activities. We will take all necessary action to stop them and bring them to justice.”

“We continue to do all that we can to disrupt and frustrate such criminal activity through intelligence-led targeted operations, proactive patrolling and the provision of robust support to Local Policing Services and our Safer Neighbourhood Teams.”

“Our intelligence picture continues to grow day by day, we will act on information provided and are grateful for the support of our local communities in providing such information, directly or with complete anonymity via Crimestoppers.”

“Routinely working in partnership with other police forces we employ a combination of tactics to ensure we get the best results.”

“We’ve seen considerable success through targeted joint activity with colleagues from Merseyside Police over recent months, this is now an established and routine approach for our respective teams with plenty more to come.”

Assistant Chief Constable Sacha Hatchett said: “The Intercept Team are relentless in the pursuit of serious organised crime and will continue to disrupt those involved and safeguard those who are affected.”

“County Lines has a significant impact on towns across the country and involves the criminal exploitation of young people and vulnerable adults.”

“Working with our colleagues across other police forces, we will continue to work hard to protect vulnerable adults and children to ensure that north Wales is a safe place.”

Police and Crime Commissioner Andy Dunbobbin said: “North Wales is not a ‘soft touch’ when it comes to serious and organised criminality – and we are determined to continue to identify and bring offenders to justice.”

“We’ll continue to make North Wales a particularly uncomfortable place for organised crime. Our Intercept Team are playing their part in dismantling and disrupting organised criminal groups by disrupting criminal activity, seizing assets and convicting them in order to protect our local communities.”

During one single stop, £35k in cash was recovered. The team have also seized firearms, a Taser, knives and mobile phones and have seized several vehicles and dealt with driving offences such as drink and drug driving and driving without insurance.

Stolen vehicles and counterfeit goods have been recovered, and multiple search warrants executed across the force and neighbouring forces by the team.

They have been involved in a number of operations involving partner agencies including the North West Regional Organised Crime Unit (NWROCU), the National Crime Agency and regular collaborative work with Merseyside Police under the banner of Project Medusa.