CONTROVERSIAL plans to create more than 80 new houses in Wrexham have been thrown out over concerns about road safety.
Member of Wrexham Council’s planning committee met this afternoon to discuss proposals to develop land on Top Road in Summerhill.
Residents filled the public gallery at the town’s Guildhall after submitting a number of objections including that the area’s roads would not be able to cope with the extra traffic.
The local authority’s chief planning officer had recommended the application by Macbryde Homes for approval as he claimed it would in fact lead to safety improvements.
However, the majority of councillors voted to refuse the scheme after a highways official told them he believed it posed a danger to pedestrians.
At the start of the meeting, local resident Andrea Evans also highlighted traffic issues and voiced worries about the loss of green barrier land.
She said: “There are already substantial queues to access both the Mold Road and the B&Q roundabout and another hundred plus cars would result in a huge problem.
“Top and Bottom Road are far too narrow and were never designed for the current volume. More traffic would simply exacerbate.
“80 new houses have already been built on Summerhill Road on green barrier land.
“Housing estates do not enhance a green field even with a slither of a park area.”
The site was previously put forward for inclusion in Wrexham’s Local Development Plan (LDP), which sets out land for thousands of new houses.
It was left out of the blueprint due to constraints, which at the time the council said were unlikely to be overcome.
But planning officers said the proposed new road layout would address the issues raised while the extra properties would contribute to a shortfall in the county.
Speaking on behalf of Macbryde, Stuart Andrews said “significant” improvements would be carried out if the plans were given the go ahead.
He said: “Much is made in objections to these proposals of the substandard nature of the existing highway network adjacent to the site and we would actually agree with this.
“Fundamental to this application are proposals to widen and add a footpath to Top Road, to realign the road and junction and add a footpath to Summerhill Road to enable all these roads to enable in a much safer way than they do at present.”
He said 20 out of the 82 proposed homes would be affordable and a financial contribution of almost £250,000 would be made to support nearby schools.
However, council highways officer Peter Douthwaite said he was concerned that the footpath outlined was too narrow and would put children at risk.
He said: “The latest plans show a footway proposed of just 0.9 metres.
“Now 0.9 metres is not an adequate width to allow parents to walk alongside a child.
“I for one would not be happy to see small children walk along a narrow footway without the protection of a parent holding their hand.
“I’m not prepared to support this proposed footway because I think it’s substandard and dangerous.”
Local councillor Gwenfair Jones told the committee the plans went against no less than nine different policies.
She said there were “no exceptional circumstances” to justify the development.
Meanwhile, Cllr Dana Davies described the health and safety implications as “worrying”.
The proposals were refused by eleven votes to three with two abstentions. ‌﻿​﻿‌﻿‌﻿​﻿​﻿​﻿‌﻿‍﻿‌﻿​﻿‌﻿​﻿‌﻿​﻿​﻿​ 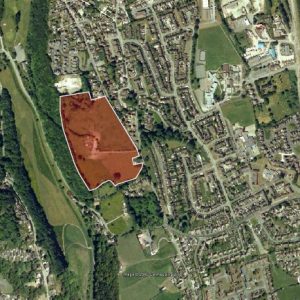