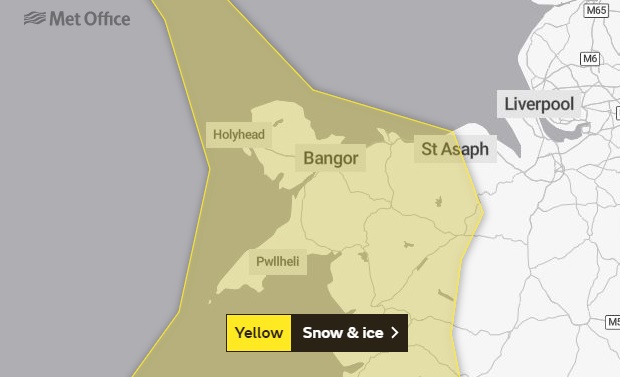 A yellow weather warning has been issued for parts of North Wales with snow and ice set to hit the region.

The Met Office has advised that wintry showers may lead to some travel disruption as the warning comes into place at 10pm tonight.

Effective until 10am tomorrow, it covers Anglesey, Gwynedd, Conwy and Denbighshire.

The national weather service said some roads and railways are likely to be affected with injuries possible from slips and falls on icy surfaces.

The Met Office said: “Wintry showers persisting through the night onwards into Tuesday morning accompanied by windy conditions will lead to patchy accumulations of 2 to 4 cm snow in some places, mainly inland and on hills.”

Chief Meteorologist, Dan Suri, said: “The Met Office has been signalling a dramatic change in weather type for several days, with very cold air moving from the Arctic through Sunday night, bringing snow showers and freezing overnight temperatures and all accompanied by strong northerly winds accentuating the cold.

“Although snow showers will predominantly affect the north and north west, they could occur almost anywhere in the UK early this week, at least temporarily.

“Some areas will remain drier and see few, if any, showers, for example: the southeastern quarter of England and the Central Belt of Scotland.

“Even in southern parts of the UK daytime maximum temperatures will struggle to rise above 9.0 °C, and although this region is likely to remain drier, the occasional wintry shower cannot be ruled out.”