Seriously ill patients staying with relatives in England due to concerns over safety of vascular services in North Wales, health watchdog report claims

Seriously ill patients are choosing to stay with their relatives in England due to concerns over the safety of vascular services in North Wales, according to a damning new report.

Betsi Cadwaladr University Health Board has previously attracted criticism after it controversially centralised services at Ysbyty Glan Clwyd in 2019.

Many of the issues stemmed from the loss of what has been described as a “highly valued” local service at Ysbyty Gwynedd.

North Wales Community Health Council, the region’s patient watchdog, has now published a report denouncing the changes to the service, which impacts everything from preventing amputations to protecting liver and kidney function.

The key findings include:

The health board has acknowledged the concerns raised, but said it had made a significant investment in staff and resources, including the development of a new £2.3m hybrid theatre at Ysbyty Glan Clwyd, which has enabled the recruitment of eight vascular consultants.

A spokesperson said it had also received a number of positive comments about the service.

But the CHC report outlines a range of concerns raised by patients, including from those too afraid to use the new vascular service.

It states: “We heard of poor experiences at the relocated service in Ysbyty Glan Clwyd, we also heard the fears of patients who are yet to use the service for their long term conditions.

“These fears might be allayed by production of data showing the better outcomes claimed. However, this has not been forthcoming.

“The record of certain surgeons at Ysbyty Glan Clwyd was the subject of much comment and the subsequent suspension by the General Medical Council of one of those surgeons has not helped confidence issues. This may be further shaken by forthcoming Inquests.”

It later adds: “During our engagement events we have heard consistently that patients are fearful of using the centre of excellence and have no confidence that their care there will be safe and timely.

“A worrying number of seriously ill patients told us they were planning to stay with relatives in England and gain access to safe vascular care through emergency departments.” 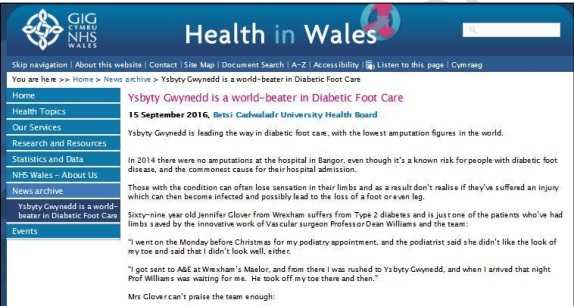 In contrast, most feedback was highly complimentary of the original service that had been provided at Ysbyty Gwynedd.

The report also details how staff were left scared of losing their jobs for speaking out about the problems.

North Wales CHC said it held a session attended only by health board staff to listen to their views.

The report states: “We found their testimony extremely concerning and were dismayed to hear that they felt unable to use the BCUHB whistleblowing procedures.

“They reported that staff raising concerns were often subsequently subjected to disciplinary action.

“We have no knowledge of whether this is the case, but it is worrying that staff have this perception.

“We also heard several reports that staff who discussed their concerns in closed social media groups were called in by managers, their conversations repeated back to them verbatim and subsequently subjected to disciplinary procedures.

“We do not understand how this could be done but are concerned to hear these reports.

“The key issue is that staff have a perception that it is dangerous to their careers to raise concerns about patient safety with senior managers at Betsi Cadwaladr University Health Board.

“This situation cannot possibly continue and we suggest that the North Wales Community Health Council be included as a named body in the BCUHB whistleblowing policy in order to restore staff confidence in the process.”

The health board is set to discuss the review of vascular services at a special meeting being held on Thursday, which members of the public can watch via live stream.

Responding to the large number of concerns highlighted in the report, a health board spokesperson said the new model had resulted in the creation of a 24/7 on-call rota for patients in need of emergency care, which did not exist before.

They said the changes were “evidence-based” and supported by the Vascular Society for Great Britain and Ireland and the Royal College of Surgeons.

They said: “We recognise that the reconfiguration of the vascular service in North Wales has caused concern amongst some.

“We have undertaken and published a review of the service and developed an action plan to map out how further improvements will be achieved.

“This review will be discussed by the board at a meeting later this week, which will be live streamed.

“Feedback from vascular patients to our Patients Advice Advocacy Liaison Support (PALS) service includes positive comments about joined-up and effective care delivered by staff who worked as a team and good communication through regular clinical updates and daily ward rounds.

“We take every concern about any service seriously and are actively engaging with staff and patients to listen and learn from their experiences to continue to strengthen this new service.”