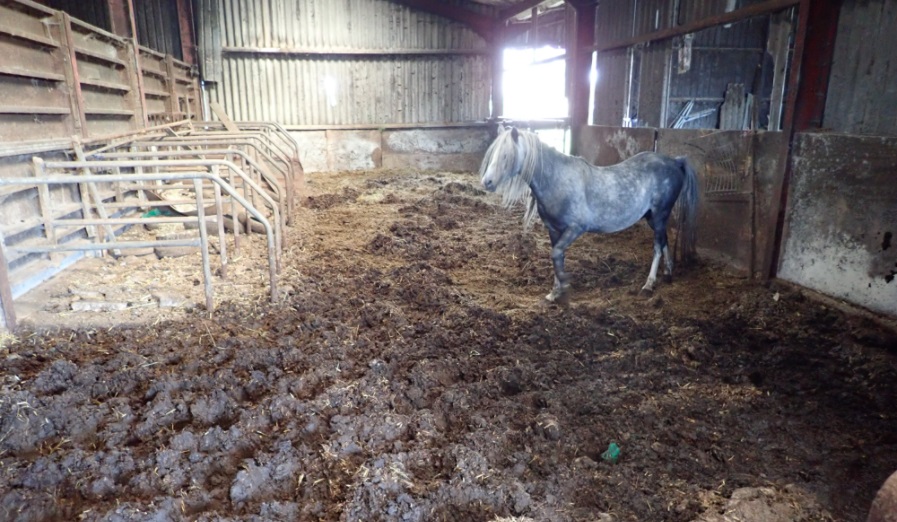 A Pwllheli man has been handed a suspended jail term after failing to meet the needs of more than 90 ponies and causing dozens of them – plus three cockerels – to suffer at his farm.

The prosecution followed a large multi-agency operation at Evans’ farm in September 2020, where a warrant was executed in relation to equines and other animals being kept in poor conditions, and – in the case of the ponies – in breach of a pre-existing ban handed to Evans in 2013.

Video footage shown to the court demonstrated the conditions at the farm and showed horses stood in filthy, dark and hazardous conditions.

RSPCA inspector Keith Hogben found dozens of horses and other animals kept in outbuildings, barns and fields in highly inappropriate conditions, with faeces everywhere – and even a bucket of dead rats.

The court heard that, in total, Evans kept more than 90 ponies in illegal conditions which were unhygienic and not free from hazards.

Evans also failed to ensure six of his ponies had appropriate treatment for parasites, while one grey female Welsh Section A pony had a severe facial deformity which had gone unchecked – all leading to more suffering for equines at the farm.

A total of 28 of the ponies suffered as a consequence of Evans’ failure to secure appropriate dental care, while a further eight were also deemed to have suffered through not receiving appropriate hoof care.

RSPCA Cymru worked with North Wales Police, World Horse Welfare, Redwings, the British Horse Society and local vets to come to the aid of animals based at the site, in a “great example of partnership working which is testimony to what can be achieved together for animal welfare.”

Three cockerels also suffered unnecessarily at the farm – two due to severe skin disease, and a third because of an ulcerated hock and/or abnormal limb position.

In addition to the suspended prison sentence (20 weeks imprisonment, suspended for two years), Evans was banned from keeping horses and poultry for a period of 20 years, and told to pay a £1,000 fine and a £128 victim surcharge.

Evans also admitted breaching a previous ten-year ban from keeping equines, handed to him in 2013 – meaning he shouldn’t have been keeping ponies again until 2023. His ban will now extend until 2041.

Sadly, three horses had to be put to sleep during the operation due to the extent of their suffering. However, almost all of the remaining horses will be made available for rehoming via numerous equine organisations under the National Equine Welfare Council umbrella – while the three cockerels went into the care of the RSPCA.

Following the sentencing, RSPCA inspector Keith Hogben said: “A large number of animals were being kept in wholly inappropriate conditions – with more than 90 ponies kept in unhygienic conditions that fell well short of legal minimums.

“Sadly, many of the equines suffered as a consequence of Evans’ inaction. From insufficient hoof and dental care, to a pony with a broken leg – this case is an example of what can go wrong quickly when large numbers of animals aren’t cared for properly.

“We’re indebted to our partners at North Wales Police, World Horse Welfare, Redwings and the British Horse Society, who worked tirelessly with us on this huge job, which was clearly so important for the continued welfare of the animals we rescued.

“Three cockerels suffered too – but I am just relieved that following the intervention of a number of agencies, many of these animals will now have a second chance of forever home happiness. It’s a great example of partnership working which is testimony to what can be achieved together for animal welfare.”