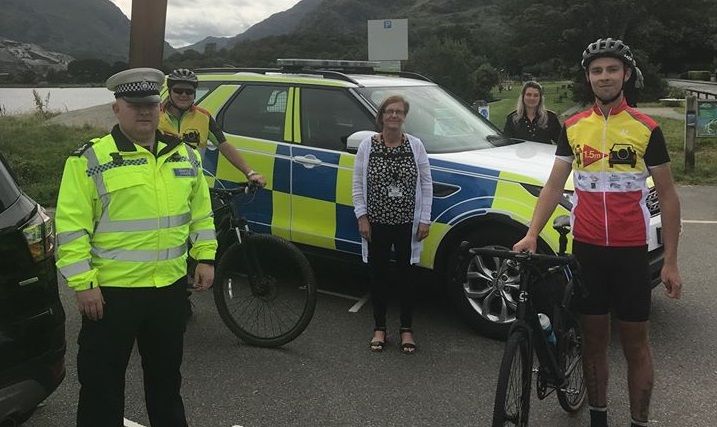 Specialist gilets are to be given to vulnerable cyclists thanks to the latest road safety initiative by North Wales Police.

The bright and colourful jackets will be distributed by officers from the roads policing unit to cyclists who are spotted out and about wearing dark clothing.

The back of the gilets also display the 1.5 metre logo – the distance required for when passing a cyclist safely at 30mph.

The Safer Cycling campaign has been launched due to an increase in the number of cyclists who are now using the region’s roads.

The six regional local authorities and the Welsh Government’s Traffic Wales service are also involved in the scheme.

Sergeant Trystan Bevan of the Roads Policing Unit said: “Since the coronavirus lockdown, we have seen an increase in the number of people using our roads for cycling.

“Now more than ever, we urge motorists to give cyclists, and other vulnerable road users, especially children, plenty of space.

“During the lockdown it was noted by patrolling officers that a number of cyclists were wearing dark clothing making them less visible to other road users.

“Cyclists have a responsibility to ride in an appropriate manner and take measures to ensure they are as visible as possible to vehicles and other road users.

“However due to the increase in the number of cyclists taking to the roads, some may be better equipped than others, so the gilets will be handed over to the less visible.

“The gilets also highlight the 1.5 metre logo which is aimed at educating road users into providing a safe passing distance to cyclists when overtaking.”

Sgt Bevan said the number of cyclists involved in accidents normally increases during the summer, but described the majority of collisions as “preventable”.

He called on road users to slow down and give each other more space to stop people from getting injured.

He said: “Drivers are not knowingly putting cyclists at risk, but perhaps they’re not looking for them, or maybe they are unaware of the dangers of close pass overtaking.

“So we are asking all road-users to look out for each other and to help safeguard cyclists.”