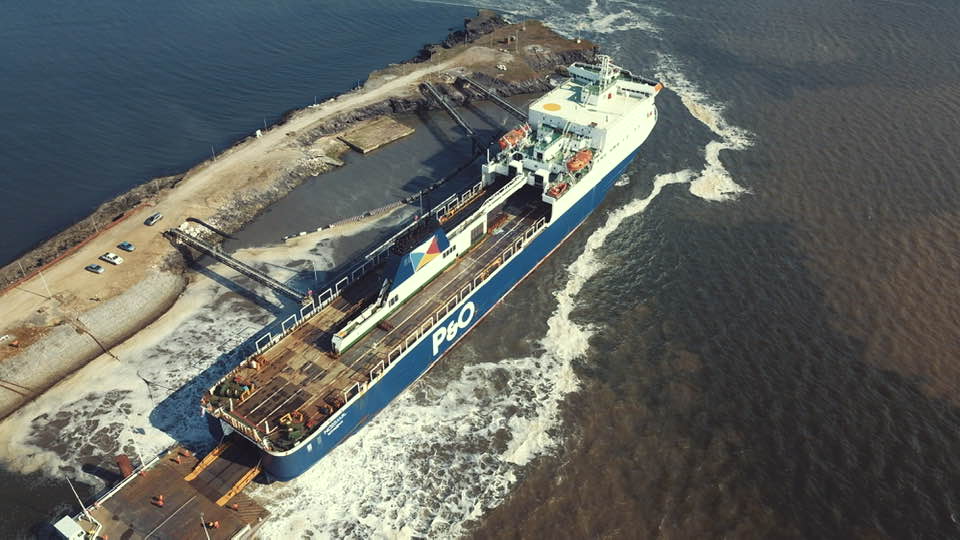 A ferry which usually sails between Liverpool and Dublin was spotted undertaking ‘berthing’ trials at a Flintshire port over the weekend.

P&O ferries owned Norbank, a car passenger and freight ferry arrived at the Port of Mostyn just before 10am on Sunday after setting sail from Dublin on Saturday evening.

It’s understood the 17,500 tonne ferry was put through a series of tests aimed at finding out whether the vessel could be used at the Flintshire port.

P&O ferries are looking at the Port of Mostyn as a potential alternative to Liverpool following a row between the company and the Mersey Docks and Harbour Company over a £600,000 bill.

Last week Peel Ports, the owner of the Mersey Docks and Harbour Company, prevented a Dublin-bound sister ferry Norbay from leaving the Port of Liverpool over the £600,000 payment.

The Norbank – which was fully loaded – was ready to depart Dublin for Liverpool when the incident unfolded and was unable to set sail.

It’s reported that negotiations took place between P&O and Dublin Port authorities through Friday over the issue.

However, P&O has drawn up contingency plans which appear to include the use of the Flintshire port as an alternative to Liverpool.

According to https://www.niferry.co.uk/ the Norbank arrived at Mostyn at 10am on Sunday for berthing trials.

The ferry, which normally sails between Liverpool and Dublin stayed at the port for around an hour before returning to Dublin.

The ship’s ramp was tested on the linkspan at Mostyn. At least one trailer was driven off and back on the vessel with a tug master. Photo’s Hans Smits

“A swift settlement” to the dispute may avoid the need to reroute the ferry operations according to an ITV report.

A spokesman for P&O told ITV: “We have been in open discussions since this crisis began with all of our ports and network to ensure that we can manage payments while everyone deals with this unprecedented situation.

We had asked for flexibility in the time required to pay but the Liverpool port refused to respond, even though we were committing to full payment.

Then we learned that our point of contact had been furloughed and they didn’t tell us.

The irresponsible and unnecessary actions of The Mersey Docks and Harbour Company Limited at a time of national crisis have closed an essential Liverpool-Dublin supply route, which means vital goods will not be able to flow between the UK, Ireland and Europe.”

Peel Ports insisted the move was a “last resort” and accused P&O of putting other supply chains at risk, ITV states.

P&O ferries are no strangers to Mostyn, in 2001 the company switched its Irish Sea crossings from Liverpool following the £17m overhaul of the Flintshire Port.

The loss making service, which aimed to carry 1000 passengers a day, was axed in 2004 because of dredging problems in the Dee Estuary.

Port of Mostyn managing director Jim O’Toole told Deeside.com this morning that P&O asked if they could use the port for a berthing trial.

Mr O’Toole said the move was a “contingency measure” he said the the trial, which lasted around an hour was “very successful“ and the port is on standby if needed.