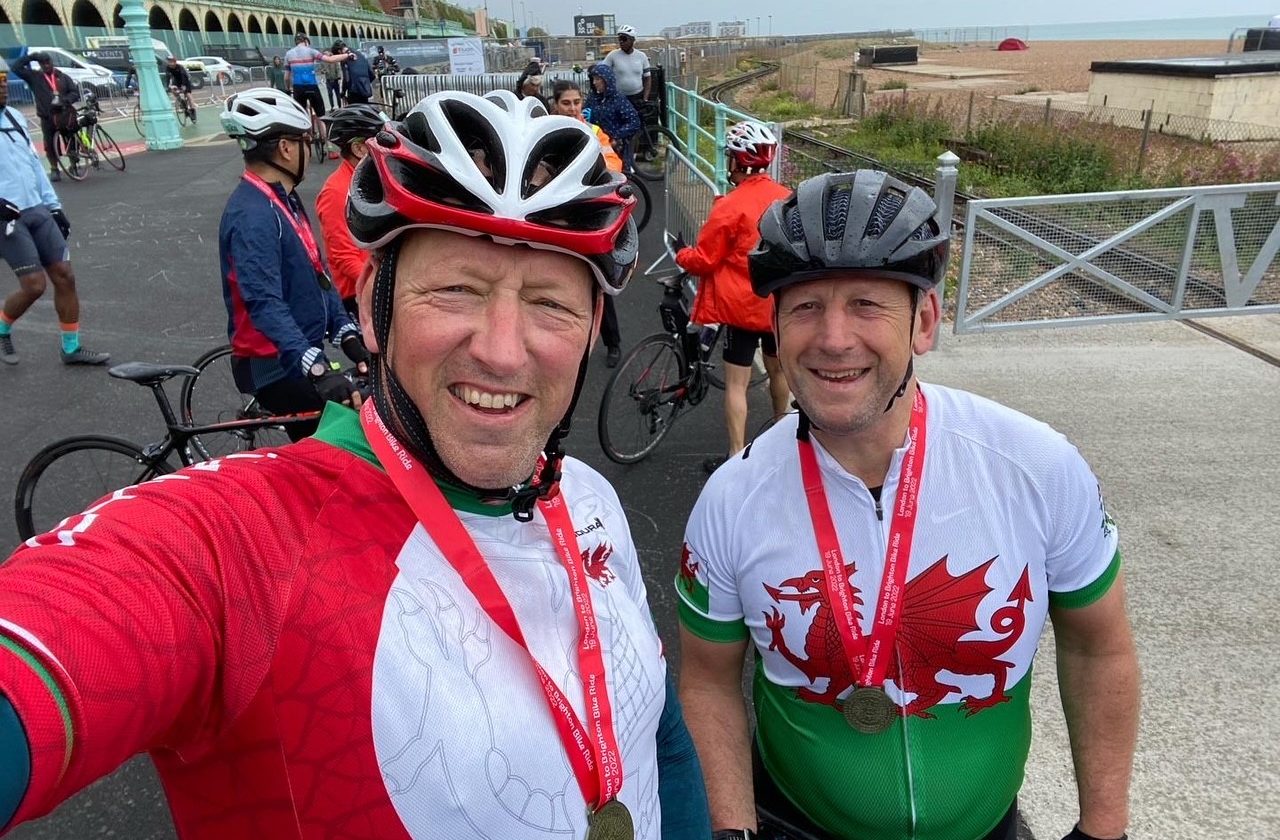 A pair of cyclists from Llanfairpwll took on the challenge of a lifetime to raise money for the British Heart Foundation’s (BHF) lifesaving research.

Efan Milner, 53, and Gwion Davies, 51, have been training for months on roads around Anglesey and Snowdonia, to ensure they were at peak fitness for the epic challenge.

They joined the Mayor of London, Sadiq Khan, and more than 14,000 other cyclists pedalling to triumph at the charity’s London to Brighton Bike Ride, together raising millions of pounds.

Project manager Efan decided to support BHF Cymru after he had a triple heart bypass operation in Broadgreen, Liverpool in 2012. 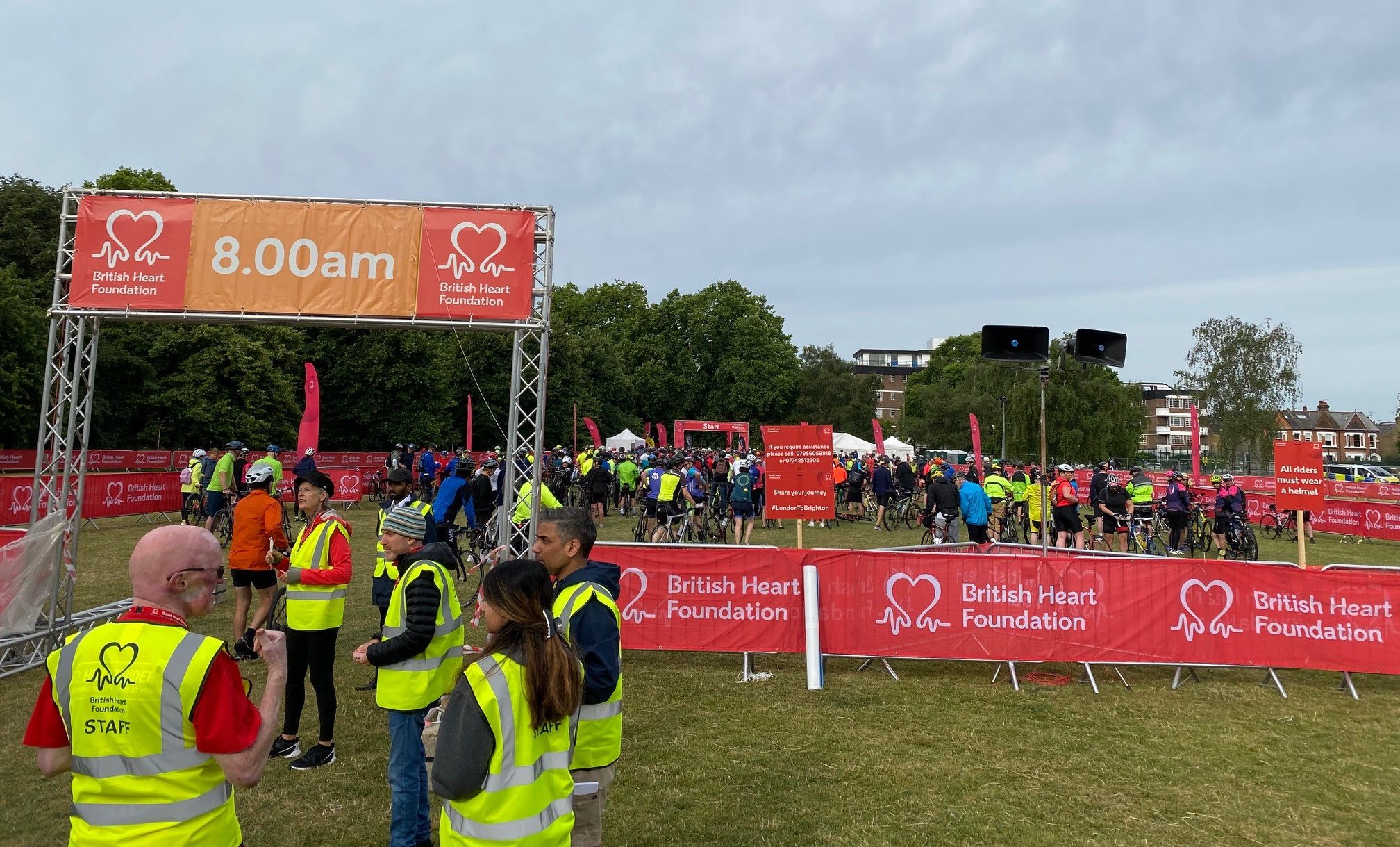 He said: “This is the 10-year anniversary and I have been raising funds for the BHF ever since.

“I am very grateful for the research work they do which played a part in my surgery, using the artery from left arm rather than a vein from my leg.”

Gwion has been Efan’s long-suffering mentor on the fitness side of things and has provided encouragement throughout.

He is a sports teacher in a local secondary school and also referees rugby matches at the weekend.

The pair smashed their initial fundraising target of £1,500 and have raised an impressive £2,195 for the BHF’s lifesaving research. 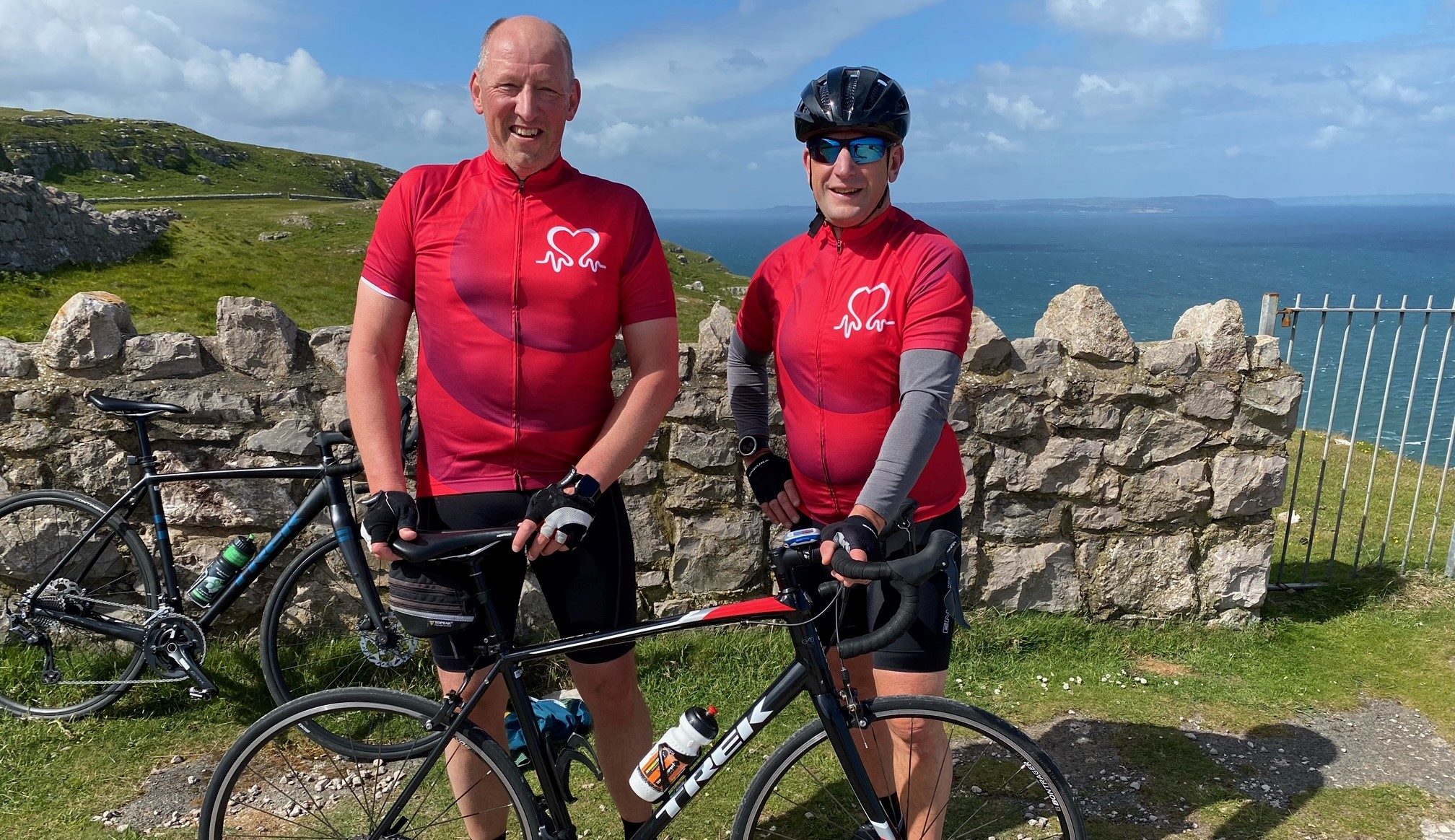 The 54-mile event returned on Sunday 19th June 2022, after a two-year hiatus due to restrictions put in place for large scale events because of the COVID-19 pandemic.

All money raised by the ride will go towards funding the BHF’s lifesaving science that will help researchers understand how to better prevent, diagnose, and cure heart and circulatory diseases, which cause a quarter of all deaths in the UK.

The 54-mile route from city to coast started in the early hours from Clapham and ended on the historic Brighton seafront.

Efan said: “Everyone was in good humour, the rest stops were excellent and provided much encouragement.

“I was impressed with the range of bikes, from tandems and folding bikes to a 1970s chopper, and we were very pleased to have completed it in 3 hours 30 mins.”

Also riding was Jason Cooper, the drummer from the legendary British rock band The Cure.

Jason was riding in memory of his former drum tech, Paul ‘Ricky’ Welton, who sadly died after suffering a heart attack in 2019. Jason has raised more than £8,000 for the BHF’s ground-breaking science.

On finishing the ride, Jason said: “It was a fabulous day. The atmosphere was amazing, especially the crowds coming into Brighton cheering us on.

“I am proud to be raising money for the BHF in memory of my great friend Ricky.

“He was a fantastic drum technician, and we shared momentous times together. But more importantly, he was a just a lovely guy and we all miss him dearly.

“The money raised from the London to Brighton Bike Ride will help ensure that others don’t have to go through the heartbreak that those close to Ricky have had to endure.

“The British Heart Foundation is leading the way through its crucial research into heart and circulatory diseases and their causes.”

Now in its 45th year, the London to Brighton Bike Ride has hosted hundreds of thousands of cyclists who have pedalled the 54-miles to Brighton raising more than £70 million for the BHF’s lifesaving research.

“Without their incredible commitment and dedication to raising money for life saving science into heart health, the British Heart Foundation could not help the 7.6 million people in the UK living with heart and circulatory diseases.

“We are so proud and grateful to Efan and Gwion for all the support they have given to our work.”

The BHF relies on the enormous generosity of its supporters to pay for its ground-breaking research into heart and circulatory diseases, including stroke, vascular dementia and conditions that increase their risk, such as diabetes.

Registration for next year’s event is open now. To find out more visit:  www.bhf.org.uk/L2B