Plans for a new primary care centre have been unanimously backed by councillors in Gwynedd.

The facility in Waunfawr will see the relocation of the village’s existing surgery to a new purpose built centre near Fferm Cross, which will also include 59 parking spots.

According to the planning documents,  the existing surgery has four doctors and employs 29 staff, covering a wide area as far as Beddgelert.

But the building of a new 990m2 two storey building is expected to increase the number of employees to 35.
Describing the current premises as “limited in size” and having “very limited parking areas for staff and patients,” it states a need for a much bigger facility.
“The additional services the practice would like to provide will naturally require a larger estate to accommodate the increased activity,” note the supporting documents.
“Furthermore, an enlarged building will enable the area to better deal with any future health provision requirements.
“The design of the proposed building has been based on the utilisation of the new rooms, with the proposed space not only ensuring the building is fit for purpose but fits the area’s service configuration strategy.
“Following expansion, (it) offers significant scope for the provision of enhanced services in a more appropriate and fit for purpose setting.
“For example, Health Visitors, District Nurses, Occupational Therapists, and the Local Authority have all expressed an interest in basing staff members within the area, thus the estate would offer the ability to integrate effective multi- disciplinary teams.”

But during the consultation phase, letters of objection were received with concerns regarding the height and surface footprint of the new building, the risk of flooding and that the local roads network could not cope with more traffic.

Cllr Dilwyn Lloyd, addressing Monday’s meeting of Gwynedd’s Planning Committee, proposed approval after describing a new facility as “much needed”  and welcomed the modernisation.
The application was backed unanimously.

In their report, planning officers had recommended approval after describing the proposal as “significantly improving medical and health facilities.”

It went on to say: “Full consideration has been given to the observations received from local residents and it is acknowledged that a development of this scale will somewhat change the character of the local environment.
“Nevertheless, considering the development in its entirety, no substantial harmful impact contrary to planning policies and relevant national guidance have been identified.” 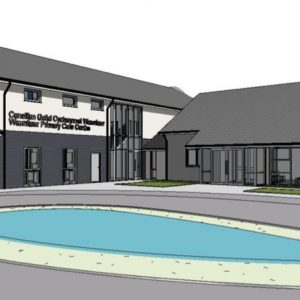