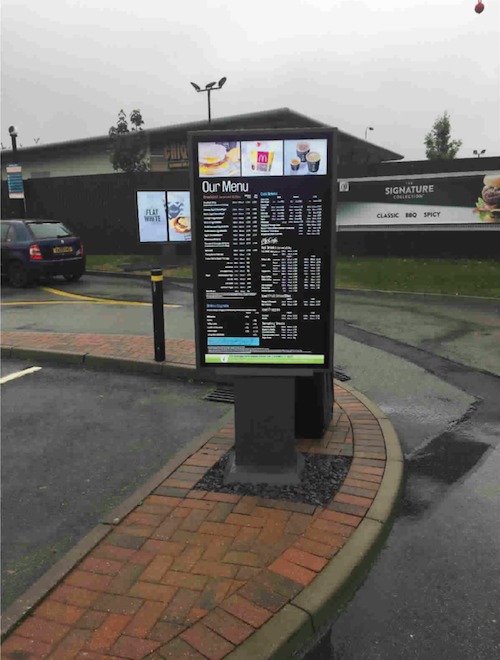 McDonald’s has won its planning wrangle with Gwynedd Council over bilingual digital screens at one of its restaurants.

Last year saw the multinational giant knocked back in its bid to replace existing drive-thru signs at its Caernarfon restaurant with bigger but improved digital versions after they were found to fall  foul of the council’s language requirements.

The application, which was refused in May 2020, had attracted opposition from Caernarfon Town Council who called for all signs to be in both Welsh and English – matching the rest of the facility which has mainly bilingual signage.

But after submitting further supporting information with a re-submitted application, authority planning officers have now given the green light after being satisfied with the latest plans.

Refusing the original proposals last November, the council’s report noted that “no attempt had been made” to create bilingual signs, thus falling short of the planning policy.

But McDonalds subsequently argued that steps had already been taken to maintain a bilingual presence at the restaurant, pointing to the Welsh text on both the pay and collect booths and signage around the car park.

“The replacement signs are digital monitors, which display the products that are for sale to improve the operation of the drive thru lane and do not include fixed text,” the company went on to state.

“Within the McDonald’s restaurant are facilities for customers to order their meals in a number of different languages on the Self Order Kiosk and are proud that this has allowed members of the public to order in Welsh.”

The decision to approve the latest application comes despite the continued opposition of Caernarfon Town Council, however, who remain steadfast that all signs should be bilingual with Welsh coming first.

But officers believed that McDonalds had offered enough background information to justify the lack of Welsh on its digital boards.

In a statement, the authority’s planning department said: “An application from the company to install four digital freetstanding signs and a digital booth screen at their premises in Caernarfon was refused last November.
“This was due to the fact that the proposal would have involved English-language only signs rather than Welsh and English signs on-site which would have been contrary to relevant local planning policies.
“The latest application from the company includes a variety of signs which will be bilingual and one electronic sign which will be in English, the information on which can be amended regularly.
“Having considered the application in detail, and the fact that the information can be changed on this one electronic sign regularly, the Planning Service decided that the application does not contravene relevant planning policies.
“As part of its commitment to supporting and encouraging the use and promotion of the Welsh language, the Council has explained to the applicant that

Planning Guidance (Wales) Technical Advice Note (Wales) 20, The Welsh Language states: ‘Signs can have a very visible impact on the character of an area, including its linguistics character. They are also one method of providing the distinctive culture of Wales, which is of significance both to the identity of individual communities as well as the tourism industry’.

“The council has made clear that it would be happy to support any efforts from the company to translate additional text for their signage for the site.”

In response to the decision, Elfed Wyn ap Elwyn of Cymdeithas yr Iaith said: “If McDonald’s is serious about respecting the language and its Welsh speaking customers, it should provide full bilingual signage in all its stores and offer a full Welsh language service to customers.
“McDonald’s can more than afford to ensure that all its signs and machines are available in Welsh.

“Technological development is not an excuse for a lack of visibility of the Welsh language anywhere, including in the private sector.”