Planners have backed the conversion of a former Dyffryn Ogwen school into a new enterprise centre.

Canolfan Cefnfaes in Bethesda is currently used as a community facility, but Gwynedd Council’s planning department has now backed an application that would see it transformed into an enterprise centre including offices, workshops, meeting spaces and bunkhouse accommodation.

The proposals, put forward by Partneriaeth Ogwen, following an announcement in March that the group had signed a lease to take over the running of the Gwynedd Council-owned facility.

In July, meanwhile, the First Minister also confirmed that the project would receive a £225,000 boost thanks to the Welsh Government’s Community Facilities programme.

In all, the now approved plans would offer seven bunkhouse rooms, each allowing five people and a separate community kitchen.

Also included is another nine units available to let to small businesses, a training and skills room as well as a repair cafe and internal lift within the former Victorian school building.
According to the supporting documents accompanying the application, no use had been made of the building since the first wave of the Covid-19 pandemic in March 2020, but that interest had already been shown by local groups for use of such a community facility.
It was also noted by council officers that a detailed business plan had been submitted.
“This application is another step towards realizing the central objective of creating employment in the area, to give entrepreneurship a home, to attract visitors in order to promote the local economy and to make it an attractive place to live, grow and flourish,” said Partneriaeth Ogwen.
“An extensive community consultation was undertaken during 2020 to gauge the response, and as a result potential tenants were invited.
“The building has been reviewed from a number of different scenarios, agreeing a flexible plan that could be adapted over time to respond to changing demand or economic circumstances.
“This application does not include any intention to extend the building, and any external works will be limited to necessary repairs.”

Council officers, in their report, noted that the plans met planning criteria and were judged to be acceptable without the need to go in front of the authority’s planning committee.

During the First Minister’s visit last month, Chief Officer Meleri Davies said,  “Partneriaeth Ogwen is a social enterprise with community, economy and sustainability at its heart and Canolfan Cefnfaes will be developed with these three themes in mind.
“The boutique bunkhouse and business units will bring economic benefit to the area and the centre will also have a multipurpose community room.
“We already have a maker space and repair café planned and we’ll be working with local partners on sustainable energy options for the building with two electric charge points due to be installed shortly.
“Community Facilities funding is an important milestone for the project as we raise the capital funds to renovate this important community resource.” 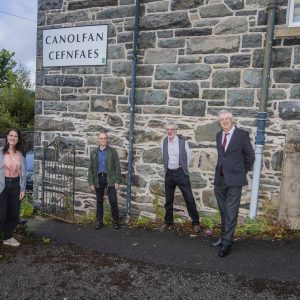