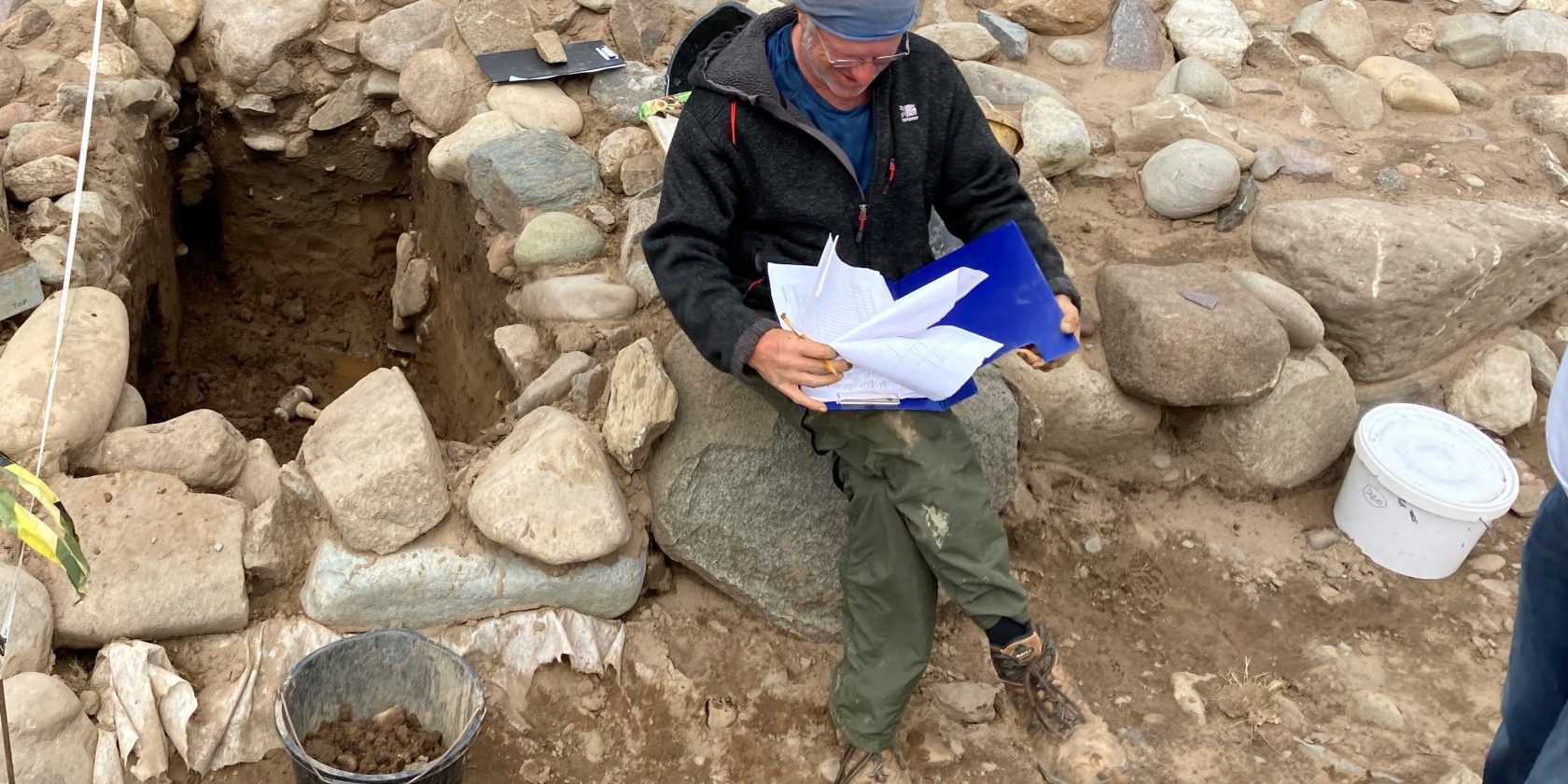 The secrets of a Romano British ’roundhouse’ discovered within a North Wales Iron Age Welsh coastal hill fort are being revealed – before they are swallowed up by the sea.
Archaeologists are completing their excavations on the cliffs above Dinas Dinlle and are now collating valuable information gleaned about the historic site.
It’s thought that in as little 50  years the round house could fall away into the sea.
The entire hill fort site could be gone within 500 years – as the cliffs are being eroded away by the relentless battering  of the tides, storms and effects of climate change.
The site, experts say, offers a rare ‘time-capsule’ glimpse into the past –  and the dig has only been allowed because the site is gradually being lost to the sea.
The latest investigation has been undertaken by Gwynedd Archaeological Trust, funded by Cadw and the National Trust – which owns the land  – with support from the CHERISH project.
According to the National Trust, the hill fort’s  defences and interior buildings are thought to have been first constructed in the late prehistoric period.
Occupation of the area has been confirmed by finds of pottery and continued into the Roman period.
Within the site, the roundhouse is set  in a dramatic location overlooking the Irish sea and north Llŷn coastal.
And although thousands of years old, experts say it has managed to survive in a fairly “well preserved state”, after being protected by thousands of tons of sand – which had to be painstakingly removed before the investigation could begin in earnest.
It’s the third season for the Gwynedd Archaeological Trust investigating the roundhouse, the latest dig has been directed by senior archaeologist Neil McGuinness and started on July 11, the last day is today (Friday) August 5.
Senior archaeologist and expert Dave Hopewell also came out of retirement to share his expertise and knowledge on the excavation, after leading previous digs.
Experts from numerous fields and organisations have also been involved and an army of enthusiastic volunteers, such as students,  locals, including retired people and schoolchildren.
So far, items uncovered have included a quern stone, used for grinding, flint scrapers, pottery shards, as well as domestic items such as a ladle, a mystery tool and a Roman coin.
Of particular interest to experts, is how the roundhouse was built and designed. It is unusually large, at 42 feet,  (13m) across,  in places its walls are 8ft (2.5m)  thick.
According to Dave, it appears, when it was constructed its builders dug down inside the interior, down to the natural soil,  then put in inner facing stones, wedging  them into place.

“The material dug from the inside was put behind the stones, to hold up the inner face.

“Outer stones were added, and the material from the inside was then used to fill up the space between the two faces, which was capped off with a layer of stones on top.” he said.

Another ‘reveal’ has been the roundhouse’s  ‘grand entry’ where the stones were very much larger and straight sided.

Two sets of revetments, either side of the entrance sees the stones flaring outwards, helping to create a greater sense grandeur.

Different periods of occupation have also been revealed, with the entrance being adapted over the years, it features stone, cobbles and slate slabs. A hearth area has also shown aspects of life inside the roundhouse.

One of the volunteers, Phd student Jessie Baumgardner, from Colorado, was was helping to work on the hearth yesterday (Thursday)  area, gently scraping back layers of soil with a  trowel.
She said: “We found an unusual patch, a very bright red area, which apparently shows scorching of the sand, turning it red.
Tiny flint items have also been found.
“It’s still extremely sharp,” Jessie said. “You could use that today as a cutting tool it is  amazing to hold something in your hand and you can imagine it being used thousands of years ago.
Volunteer Ashley Smith from North Carolina, who is doing an MA in Celtic Archaeology at Bangor University, was also helping. “I’ve really enjoyed being part of this project as a volunteer.
“I wanted to get involved because it is not only really interesting but is a great way to gain experience in the field of archaeology.”
Veteran volunteer Jeff Marples a former aircraft engineer from North Wales was also busy recording details.
He said “I thoroughly enjoy getting involved as an amateur archaeologist, I am retired now, it’s an interest.
He was busy taking drawings and doing  measurements of a section of a half section of post hole feature.

“I have volunteered at the site before and thoroughly enjoy coming here to help out in my retirement.

“I’ve gone from being an occupational therapist to an amateur archaeologist!

“You gain so much from being involved in a project like this. It’s absolutely brilliant, fascinating.”

During the dig  on Thursday – she also broke the news to her fellow diggers that her daughter had given birth to a son – two weeks earlier than expected!

“I shall never forget where I was when  I heard that news!” She joked.

Gwynedd Archaeological Trust education and outreach worker Dan Amor added “This project has been great in terms of public engagement .

“We’ve had volunteers, some of them local to the area, and Bangor University students helping with our excavation work, local schools have been involved too.
Adding “We held a very successful public open day and the project has generated a lot of press interest.”

Apart from its archaeological interest the hill fort area at Dinas Dinlle also offers literary interest – it was mentioned in the Welsh folk tales, The Mabinogion.

It  also attracts geologists, the area and is a Site of Special Scientific Interest (SSSI), for the importance of its glacial drift and sediments, known as a ‘moraine.’

On the northern slopes of the hill fort, there is also a Second World War feature, a seagull shaped trench  which is protected as Scheduled Monuments by Cadw. 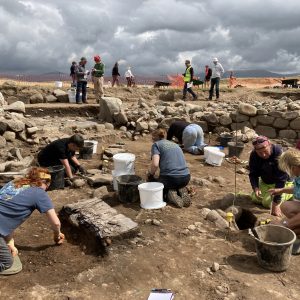 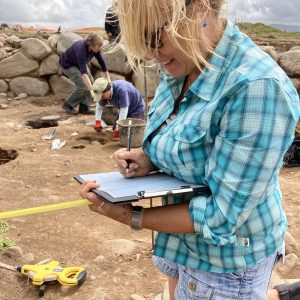 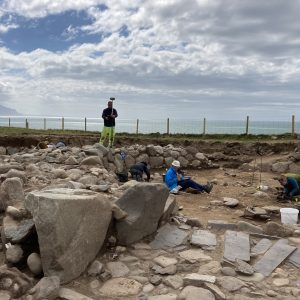 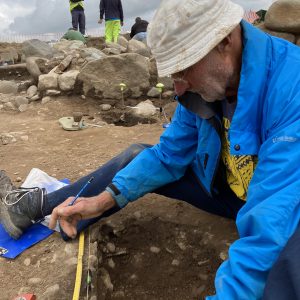 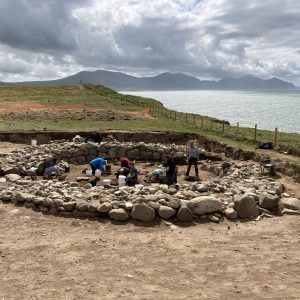 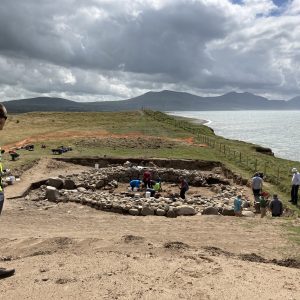 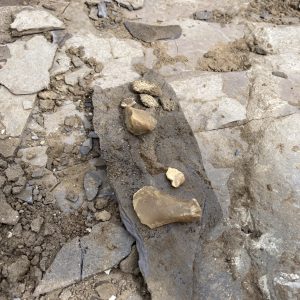 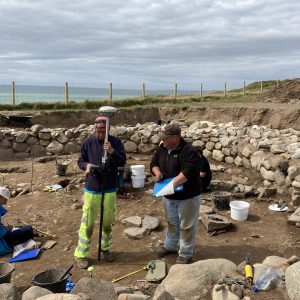 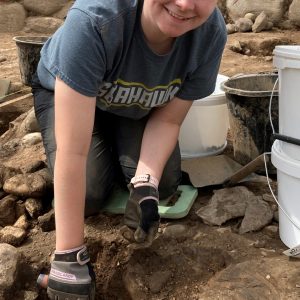 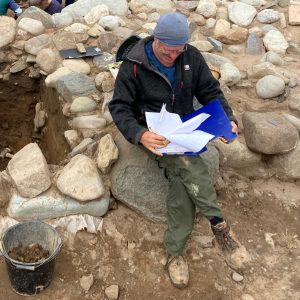