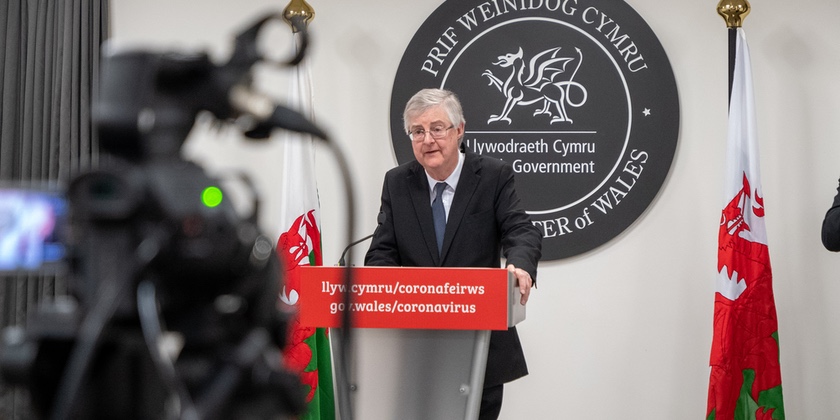 A two to three week “circuit break” to help stop the spread of coronavirus could be announced next week.

The Welsh Government confirmed earlier this week it is actively considering what it is calling “short and sharp” measures following advice from the Scientific Advisory Group for Emergencies (SAGE).

The same advice was given to the UK government but the Prime Minister has been accused of ignoring his own scientists instead opting for softer options such as pubs closing at 10pm.

Expected to last between two to three weeks, the circuit breaker could see a similar “stay at home” message like the one in place in March – along with the closure of non-essential retail and hospitality.

At today’s Welsh Government briefing, First Minister Mark Drakeford said that that circuit breaker or “firebreak” was one of the options being actively considered.

A decision is not expected until the start of next week after further meetings have taken place over the weekend.

Speaking at the briefing, the First Minister said that whilst Wales is in a “better position” than the rest of the UK, it is continuing to see a rise in positive coronavirus cases and hospital admissions.

Last week there were 500 people in hospital suffering from coronavirus, which rose to 700 this week.

As of yesterday there were over 800 in hospital, while said that critical care units in Wales were “full”.

The First Minister said: “I have to tell you that we face a very serious situation today in Wales

“Unless we are able to get coronavirus back under control there is a real risk that our NHS will be overwhelmed – and if that happens, then even larger numbers of people will die as a consequence, none of us want to see that.

“There are no easy options to bring the virus back under control. Once again, we will all have to act together to bring the levels down and to keep them down over the winter ahead.

“Here in the Welsh Government, we are looking very carefully at introducing a time limited firebreak, also known sometimes as a circuit breaker of a type recommended by SAGE, the UK expert scientific advisory group, and by our own advisors here in Wales,

“This would be a short sharp shock to the virus, which could turn back the clock, slowing down its spread and buying us more time and vital capacity in the health service.

“A firebreak would also however mean a short sharp shock to all our lives. We would all have to stay at home once again to save those lives.

“But this time, it would be for weeks, and not for months. We are considering a two or three week firebreak.

“The shorter the period, the sharper the measures will have to be, a successful firebreak would reset the virus at a lower level.

“Together with a new set of national rules for the whole of Wales, after the firebreak period is over, we would have slowed the virus down enough, we think, to get us through to Christmas.”

He added: “We are considering all this, because the situation is so serious, that we have no option but to look at new and different ways to keep Wales and to keep you safe. Doing nothing is not an option.”

Asked what support would be given to any businesses that would have to close during this period, the First Minister said he had written to the Chancellor of the Exchequer and that Finance Ministers in Wales had met to discuss any additional packages of support.

Mr Drakeford said: “Key to that decision will be a package of business support that we are able to put together.

“I’ve written to the Chancellor of the Exchequer this morning asking him to align some of the help that the UK Government is providing to a potential circuit breaking period.

“Here in Wales and my colleagues Ken Skates as the Economy Minister and Rebecca Evans the Finance Minister were meeting together yesterday to look at how we can bring money together from across the Welsh Government to provide an uplift in the support we were already planning to offer businesses in local lockdown areas.”

“We had already announced £140m Phase three of our Economic Resilience Fund. Now we will want to go above and beyond what we were already planning.”

“Our ability to corral that package together, to agree the details of it ,will be pivotal to the decision that the cabinet will finally take on whether or not a circuit breaker period can go ahead.”

You can view the full briefing on the below link, including the full Q&A session: