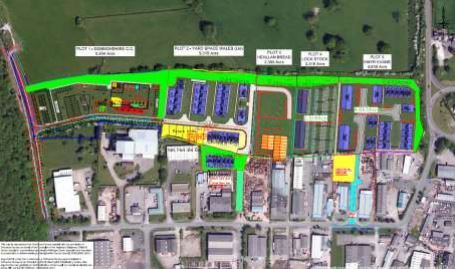 Councillors have waved through plans for a waste transfer station capable of processing 75,000 tonnes of refuse each year and a massive industrial park expansion.

The site on land adjacent to the Colomendy Industrial Estate in Denbigh will be Denbighshire council’s new centre for waste.

The scheme is part of a consortium of five separate applicants, which extends the estate by 8.25 hectares.

The authority believes the new facility will help it reach the Welsh Government target of recycling 70% of waste by 2025.

Preparatory works and building will start in May this year and be completed by September 2021.

The remaining four plots will be completed between two and five years.

In addition to the new waste transfer station, outline plans for 31 units built in two stages were passed on behalf of Yard Space Wales Ltd. They will be a mix of offices, storage and industrial spaces.

Emyr Evans will build 22 units, for office, industrial and storage use in two phases.

Finally Henllan Bread will expand its premises on the estate with a 1,585 square metre extension.

Officers passed all five applications for the site unanimously.

The facility will be open from 6am until 7pm on weekdays, closed weekends and open on Bank Holidays – except Christmas Day and New Year’s day.

The refuse will be dealt with in the following ways:

Recycling will be sorted, baled and stored before being passed on to recycling facilities elsewhere.

Household waste would take up around 55,000 tonnes of the site’s capacity and trade waste 20,000 tonnes.

The report also details what will happen to the various waste offloaded at the site.

Residual waste, left in black bins, will be offloaded and transferred to the new Parc Adfer facility on Deeside to extract energy.

Green waste will go to Flintshire’s composting site in Greenfield and food waste will be kept in sealed containers and removed from site every 24 hours.

Highways waste will sorted and sent to one of two facilities in Pwllheli or St Asaph.

Absorbent hygiene products will be kept on site in containers and transferred for processing within 72 hours.