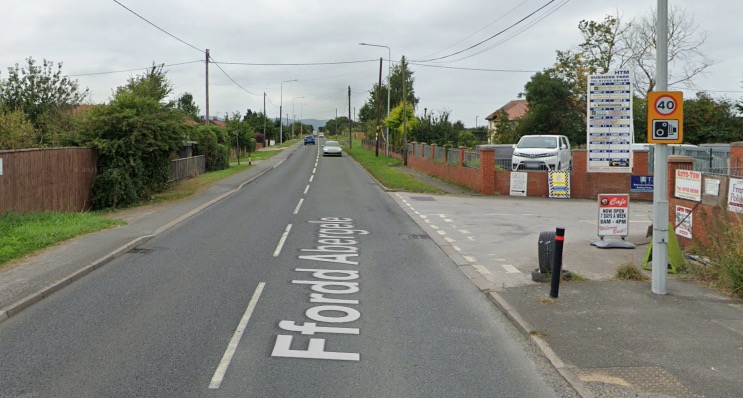 Thousands of drivers have been clocked speeding on a main road as calls are made to reduce the speed limit.

Angry residents living along Abergele Road in Rhuddlan have warned that the drivers are putting lives at risk.

Data recorded by a digital slow-down sign showed that 17,760 vehicles were captured speeding between the roundabout near KFC and the national speed limit sign on the road.

The current speed limit is 40mph, but residents living on Abergele Road and Highland’s Road want this reduced to 30mph and have signed a petition calling for the change.

Although the average speed of those speeding has been recorded at just over 43mph, this is an average, meaning some vehicles are travelling faster.

And one vehicle was recorded travelling at 70mph through the stretch on 9 May – 30mph over the speed limit.

Denbighshire Council said they believe the location does not meet the criteria for a 30mph speed limit.

They added that there were indications the slow-down sign had helped reduced traffic speed on the road.
Giles Kennedy has been living on the road with his wife and 14-year-old son since December 2019 and says it is only a matter of time before someone is killed.
“People just come off the roundabout so fast and accelerate,” he said.
“The council put up a sign about six months ago asking people to slow down, but it has had absolutely no effect.
“Everyone understands there’s an issue, but they don’t want to deal with it because it causes too many issues. It’s difficult and expensive.
“People are pretty much doing the national speed limit on a 40mph road. It is very dangerous trying to leave any of these houses and businesses.
“Pulling out the drive, you have a good look and the cars are on you, and I have had numerous close shaves. They are doing 45-50 miles an hour.”
He added: “You can’t cross the road, and there are people who cross the road on disability scooters. Somebody could be killed. It’s a built-up area, a residential area, and it has the wrong speed limit, and it is being ignored.”
Rhuddlan councillor Arwel Roberts said he was in discussions with the council’s highways department.
“We are in the process of meeting Denbighshire’s highway officers,” Cllr Roberts said.
He said a meeting would take place in September.
He added: “I have organised a petition for slowing the speed on that road.
“I’ve also asked for a crossing there because there are people who are disabled, and it’s not fair to them. I was given a negative answer by the council.
“I’m disappointed, but I’m meeting the highway officers on September 14, and we will be discussing a survey of the whole town, but one of the main areas we will be looking at is Abergele Road.”
A spokesperson for Denbighshire County Council said: “The council has spoken to individuals living in properties along the A547 Abergele Road and provided responses to their concerns.
“Some of the residents are continuing to request that the speed limit be lowered from 40mph to 30mph at this location.
“However, we have explained the council’s position that the location does not meet the criteria for a 30mph speed limit, taking into consideration the character of the road, recorded speeds, and the number of injury collisions reported.
“A speed Indicator Device (SID) illuminated sign has been put in place and funded by the town council.
“There are indications that this has reduced traffic speeds in this location as a result of its installation.”