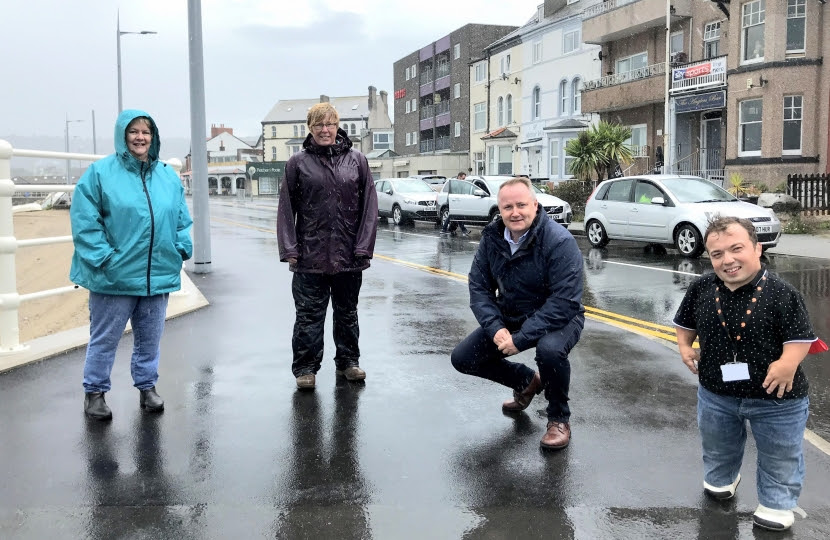 Conwy Council has been criticised for failing to address road safety problem in Rhos-on-Sea in time for Easter.

Last year, the promenade in Rhos was improved and widened to create a shared footpath andcyleway, but this resulted in the narrowing of the road when cars are parked opposite the promenade next to to the Angler’s Bar.

Clwyd West MS Darren Millar said it creates a pinch point so that only single file traffic can pass, causing delays and inconvenience for motorists.

Local campaigner Jo Nuttall organised a petition to try to resolve the issue and hundreds of local people signed.

Mr Millar supported residents and worked with Cllr Glenys Baker and Cllr Jay Lusted to persuade the council to come up with a solution.

He said he was pleased when the council agreed to his request for yellow lines to be installed and had hoped the new measures would be in place in time for Easter.

However, the work has not yet been carried out and the Conservative MS said the lack of lines was already causing long delays at the pinch point.

He said: “This traffic issue has been a huge problem in Rhos and I was extremely pleased when the council agreed to carry out these essential works following our meeting with them last September.

“It is therefore extremely frustrating and disappointing that as we head into the Easter weekend, this problem persists.

“Although, due to the pandemic, Rhos is unlikely to see the level of visitors it usually would over the Easter weekend, now that travel restrictions in Wales have been lifted, there will be enough visitors about for this to be a huge problem. These lines need to be installed as soon as possible.”

Cllr Jay Lusted said: “The council agreed to install these lines in September last year, I therefore can not understand why after all these months we are still waiting.

“This weekend is likely to be busy along the promenade and not having these measures in place is going to cause a lot of problems.”

Cllr Glenys Baker, added: “It is very disappointing that the council has not yet installed these yellow lines when they agreed to last September.

“It is an accident waiting to happen and the measures should have been put in place during the quieter winter months.

“I now call for the council to ensure they are installed in time for the next bank holiday weekend in May.”