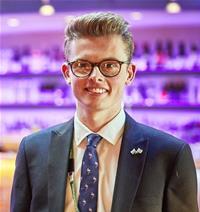 Conwy needs “a housing revolution” a councillor has claimed after figures show the amount the council has spent on emergency accommodation has more than doubled in the last five years.
Figures released by Conwy Council to the Local Democracy Service show the local authority spent £302,246 in 2014/15 on short term housin for people who are homeless.
But by 2018/19 the spend had jumped to £729,262, after rental income had been taken into account the cost to the council in that period was £605,320.
Some of that money was spent on sending people out of county to Gwynedd with the spend on this dropping in 2014/15 from £39,379 to £17,140.
Plaid Cymru’s Cllr Aaron Wynne, said: “It’s clear from the FOI request that the demand for emergency accommodation in Conwy County continues to spike as the scarcity of affordable and social homes worsen.
“Emergency accommodation, which includes bed and breakfasts, homeless hostels and self-contained rented flats, is meant to be temporary in order to keep people off the streets and into long-term housing.
“Due to the lack of available social homes in Conwy, people who present as homeless and their families are having to live longer in emergency accommodation until more suitable housing is available, which adds a significant cost to the Council.
“We need a housing revolution in Conwy. We must think outside the box to find new ways of adding homes into the social rented stock. Every family needs a home to live in.”
The problem has been made worse, according to one camapign group, by the lack of social housing.
A Shelter Cymru spokeswoman: “The number of families in temporary accommodation has increased massively in Wales in recent years – up 46 per cent in the last four years. There is a severe lack of social housing that is driving homelessness and keeping families homeless for longer periods. We’ve also seen certain welfare changes making it harder to resolve homelessness, such as the five-week wait for the first Universal Credit payment, and the freeze on Local Housing Allowance which has shut so many people out of the vast majority of private rented housing.
“Living in temporary accommodation is incredibly difficult for anyone but it is especially hard on children and families. Parents sometimes spend hours of their day taking their children to school on public transport, and trying to cook a decent dinner with minimal facilities. For children, experiencing homelessness can have lifelong impacts.
“We need to make sure that all political parties ensure that the benefits system supports families and young people.”
Cllr Charlie McCoubrey, the cabinet member responsible for housing, said: “The challenges faced by our homeless prevention team are both complex and manifold. Changes in national legislation and unique local problems are extremely challenging. Despite these pressures it is encouraging to see the significant improvements made in homelessness prevention and this stands testimony to the hard work and professionalism of the whole team. The rising cost of temporary accommodation in particular is noted and we must continue to look for new and innovative ways to alleviate this”