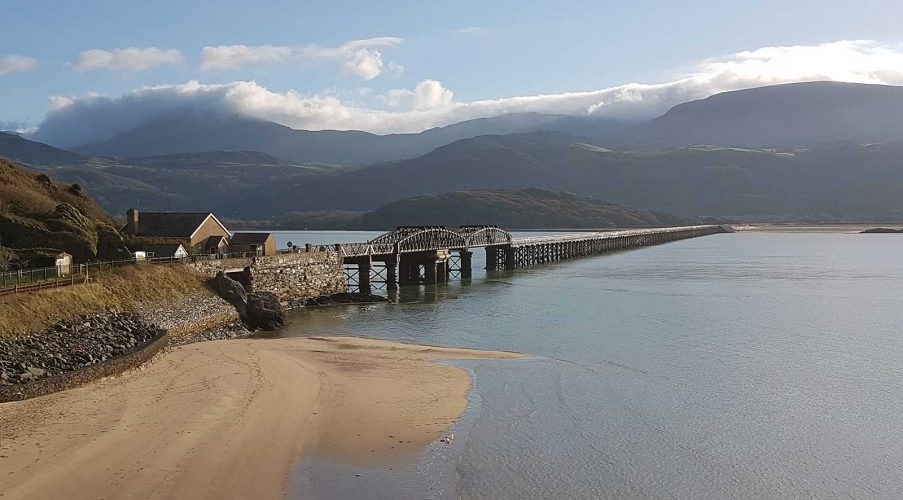 Network Rail are reminding passengers that work to restore Barmouth Viaduct restarts this weekend, after one of the busiest summer seasons in living memory

The vital £30m restoration project has been carefully planned to avoid the busy summer months, with Barmouth recently named the third fastest growing holiday destination in the UK.

Passengers, visitors and the local community are reminded that, with the peak summer season over, the viaduct will be completely closed, including the walkway, from Sunday 12 September to Sunday 12 December 2021, in order to allow the work to be carried out safely.

“Barmouth was thriving this year” according to Arek and Nadine Wisniewski, who manage the bar at the popular Tilman Hotel.

“Places were packed to the point of people struggling to book places to eat. It was that busy”, Arek said.

“Obviously, when the viaduct is closed it will be tough with tourists having to use other modes of transport, but everyone here wants to see it renewed. It’s beautiful and we want to make sure it lasts. We are so happy Network Rail is spending so much money to protect it.”

At the heart of Barmouth’s appeal to visitors is its Grade II* listed Barmouth Viaduct, the longest timber bridge in Britain.

Despite surviving two world wars, a near-miss with a live naval mine in 1946, and even a marine woodworm invasion in the 1980s, at more than 150 years old, parts of the bridge are rotting and decaying.

In its biggest ever upgrade, Network Rail are replacing more than 1,000 timber and metal elements of the viaduct as part of a £30m restoration.

Bill Kelly, Network Rail’s Route Director for Wales and Borders, said: “I’m delighted that so many visitors have returned to Barmouth this year to enjoy everything the town has to offer.

“We have carefully planned our £30m restoration of Barmouth Viaduct so that most of our work takes place outside the peak summer season, but also avoiding the worst of the winter months when bad weather would make the work too challenging.

“The upgrade will allow us to continue to run a safe, reliable and efficient railway, and secure the future of Barmouth Bridge for years to come.”

Transport for Wales CEO, James Price said: “The railway has played a vital role in Barmouth’s bounce back this summer – with passenger footfall topping nearby Porthmadog and Pwllheli – and even exceeding the number using the train to travel to South Wales’ famous Barry Island.

“After such a tough eighteen months, it’s been fantastic to see Barmouth so busy, and Network Rail’s investment in the viaduct will help secure the future of the town for generations to come.”

Network Rail is carrying out additional work during the £30m restoration, including replacing all the timber main beams.

The upgrade has been designed to avoid changing the viaduct’s appearance, with the mechanism for the swing span remaining in place. The entire 820m length of track will also be replaced.

Network Rail has worked closely with Transport for Wales, Cadw, Gwynedd County Council, local elected representatives and others over several years to develop plans to upgrade the bridge.

To reduce the impact of the work, it is taking place over three years, with three shorter closures of the 19th century viaduct, rather than one longer closure.

Transport for Wales will be providing rail replacement services during the closure and passengers are advised to check before travelling.

During 2022, Network Rail will replace the metallic spans of the viaduct and the associated track. They will also be upgrading the track at the north and south end of the viaduct in 2022.