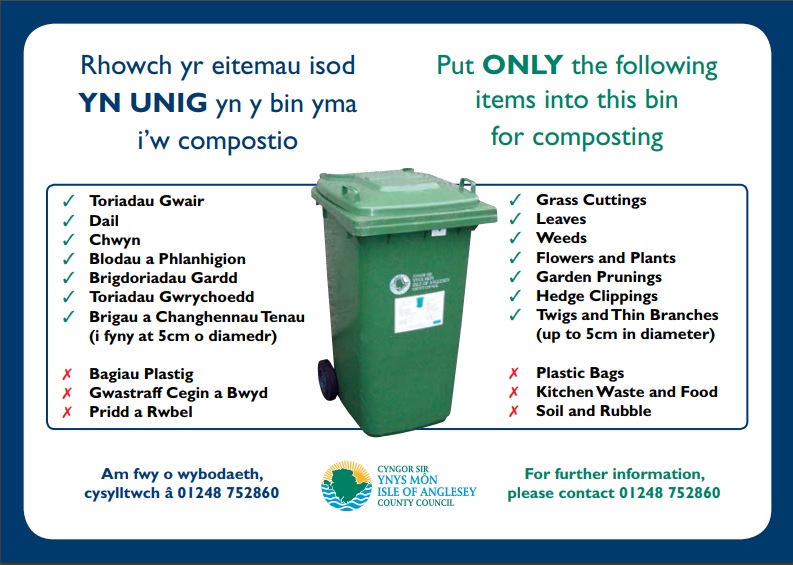 Decision makers have denied claims that the introduction of a £35 annual charge for garden waste collections is a “back door tax” on the people of Anglesey.

Approved on Monday, the move brings Anglesey in line with the rest of north Wales where every other authority already charges for the fortnightly service.

But despite assurances that the currently free service would be an “opt-in” and otherwise resulting in a council tax rise across the board, the leader of the opposition claimed during Tuesday’s full council meeting that the move was unjustified.

Claiming that the executive had denied it was to introduce such a charge when  asked about it in March, Cllr Bryan Owen of the Annibynnwyr Môn group said: “For me this additional cost is nothing more than a back door tax.”

But in a statement, the waste management portfolio holder stressed that the move would mean that those who don’t need or require a green garden waste collection would not have to pay for the service.

“This decision brings Anglesey in line with all other local authorities in North Wales; with some already having been charging for green waste collections for a number of years now,” said Cllr Bob Parry, adding that the principle of a garden waste charge was adopted in January.

“Not all properties on Anglesey need a green garden waste collection service because some properties do not have a garden or home compost.

“The £35 fee is a contribution towards the cost of providing the service, which currently falls on all residents through Council Tax.

“For this reason, we feel that introducing a charge is fair, as the service will only be paid for by those households that choose to use it.”

He added: “Those who don’t want to pay the fee can still take their green waste to either of our household waste recycling centres in Penhesgyn or Gwalchmai free of charge or continue composting their own green waste.”

Set to be launched on April 1, 2021, the annual fee forms part of the new waste collection contract awarded to Biffa and will entitle households to 26 collections of their 240 litre green bin for grass and other garden waste.

While addressing Monday’s meeting of the executive, the finance portfolio holder Cllr Robin Williams claimed that not introducing the charge would mean having to add another 1% on everyone’s council tax bills from April.

There will be no charge for green garden waste collection from cemeteries, places of religious worship or village/community halls.

Biffa’s workforce have been collecting the island’s waste and recycling since 2007, but the renewed deal will cost the authority an extra £800,000 a year as well as having to purchase a new fleet of vehicles and equipment which will also cost an additional £500,000 per annum.

Police are appealing for witnesses to come forward after a crash between a motorbike and a camper van on the A470 this morning. (LINK)

Officers have appealed for help finding Liam Scoby, who was last seen by Ysbyty Gwynedd in Bangor. Please help by sharing. (LINK)