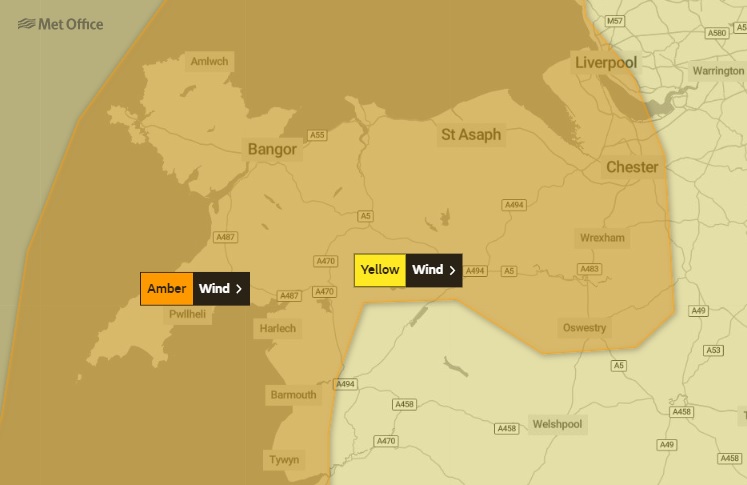 An amber weather warning has been issued for North Wales as Storm Arwen is expected to bring winds of up to 80mph to the UK.

The Met Office warning is in place from midnight tomorrow (Saturday) until 9am with high winds expected to cause some travel disruption and damage.

The national weather service said flying debris is likely and could lead to injuries or danger to life with probable damage to trees, temporary structures and buildings, such as tiles blown from roofs.

Longer journey times and travel cancellations are likely, as road, rail, air and ferry services may be affected with some roads and bridges likely to close.

Elsewhere, a rare red weather warning has been issued for coastal areas in the north-east of the UK from 3pm today and will last until 2am on Saturday.

Met Office Expert Meteorologist Daniel Rudman said: “Storm Arwen is associated with a deep low pressure system that will impact the northeast most significantly from Friday, but will also bring wider impacts to the UK with high winds, rain and snow probable, especially over higher ground.

“The most significant impacts from Storm Arwen will be the high winds that much of the UK will see on Friday and in to Saturday, with gusts possible in excess of 80mph in exposed coastal areas, especially in the northeast.

“Coupled with the high winds, Storm Arwen is bringing the potential for rain, sleet and snow.

“The snow will likely be seen the most in the high ground in the north, but there’s a chance of some lower level impacts towards some southern areas, which is reflected with the yellow warnings for snow we have issued.”

Storm Arwen brings with it the risk of disruption to travel, power cuts and potential damage, especially near the coasts, where large waves could see material thrown on to coastal roads, sea fronts and properties.

“Sadly, around 150 people accidentally lose their lives around UK and Irish waters each year and over half of these people didn’t plan on ever entering the water. Slips, trips and falls can be a major factor in these kinds of incidents.

“If you see someone else in danger in the water, call 999 and ask for the Coastguard. If you have something that floats that they can hold on to, throw it to them. Don’t go in the water yourself – too many people drown trying to save others.”