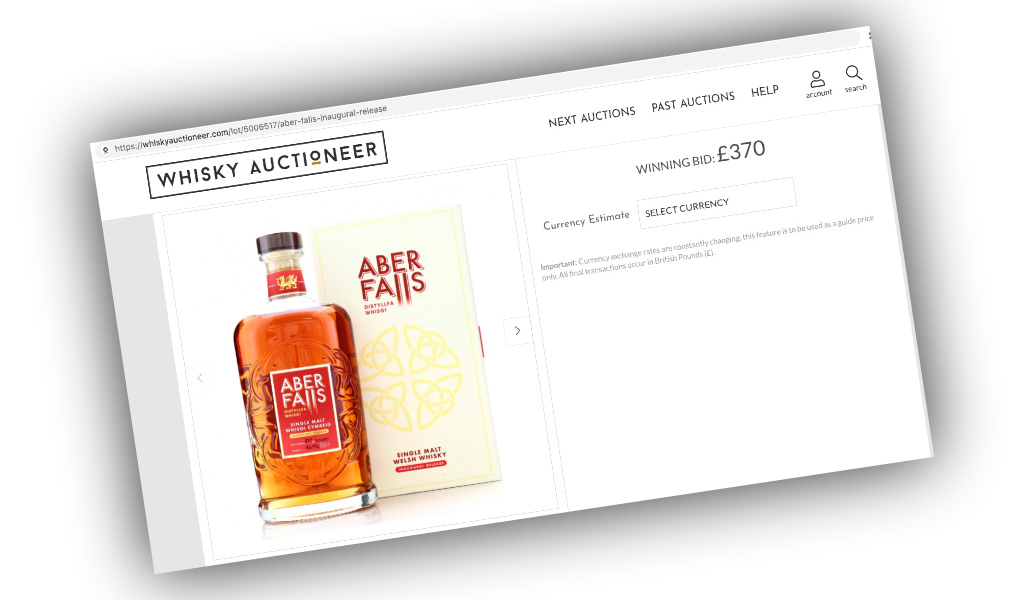 Bottles from first ever release from the new Aber Falls distillery have hit specialist auction websites, with large prices being paid to secure them.

The ‘Inaugural Release’ consisted of a limited edition of 2,000 individually numbered bottles priced at £45. On release day the distillery website crashed due to demand, with huge physical queues on site as people waited to secure a bottle. Other retailers suffered the same fate due to demand, with several other North Wales outlets seeing their ecommerce operations buckle under the strain – with the larger MasterOfMalt.com selling out their small allocation in under twenty minutes.

The whisky has won praise for those who have tasted it, with it described  as having the ‘spirit character shining through but is complimented well by a creative mix of cask types. The result is lovely.’ The whisky is ‘quintessentially Welsh; milled and distilled in North Wales using 100% Welsh malted barley and rock-filtered water from the Aber Falls waterfall’ and aged in the on-site warehouses. Although it is three years old, young in whisky terms, the flavour profile has been enhanced by a rare use of orange wine casks, as well as more common oak and sherry casks.

One commentator praised the distillery release pricing of £45, “Hats off to Halewood too for the pricing. They could have charged much more for this inaugural release, as others have in the past. This is a double edged sword though, as it sold out quickly and left people that missed out disappointed. But there is always next time. It will be very interesting to see what future releases bring.”

Bottles of the release have been appearing on several whisky auction websites reaching several hundred pounds, with one auction ending this week hitting £370 for a single bottle.

Currently several more bottles are on resale auction, with ‘The Grand Whisky Auction’ listing 40 bottles on its current auction with under a week to go with no reserve.

North.Wales understands there is set to be another whisky release around September time from the distillery.